MANILA, Philippines—Fifteen years ago, two girls went missing and set off a series of events that led to what would later be called “ Cebu ’s trial of the century.”

While waiting for their father to pick them up, sisters Marijoy and Jacqueline Chiong disappeared at a mall in Cebu . Accused of their rape and murder was Paco Larrañaga, a culinary arts student whose whereabouts that day had been confirmed by dozens of witnesses and photographic evidence. He was in Manila, 300 miles away from Cebu , and couldn’t have been anywhere near the victims.

There was a deafening clamor for immediate justice, not just in Cebu but throughout the country. So in a dramatic turn of events, the judge favored the plea of the Chiong sisters’ family and convicted Paco and six others for life imprisonment, a verdict which was eventually raised to death penalty due to pressure from the public and widespread media attention.

The trial became a game of chess where many players were involved and people kept moving their pieces. In the end, Paco was checkmated—he was imprisoned in Bilibid for years, his fate celebrated by many as it was seen as a triumph. He was not given a chance to speak or defend himself.

More than a decade since, filmmakers Marty Syjuco and Michael Collins give him a voice. They revisit old wounds and step into the many thorns of the Philippine justice system in their critically acclaimed documentary, Give Up Tomorrow. In addition to building a strong case for Paco’s innocence, the film exposes the messy scheme of events that surrounded the trial, revealing the interconnected complexities that permeate Philippine politics and culture.

Disclosing a collection of interviews with forensic experts, political analysts, and major players in Paco’s case, not to mention controversial pieces of evidence that were left uncovered for a long time, Give Up Tomorrow brings to light the lack of due process and the elaborate frame-up done through a shameless display of political favors.

The documentary begs the terrifying question: What if the so-called Cebu ’s trial of the century was actually a mistrial?

Due to the film’s controversial subject, Syjuco and Collins had some trouble finding local venues for a commercial screening. In fact, no cineplex dared to screen it in Cebu , even for a premiere night. So the filmmakers, together with a small group of undaunted people, worked hard to bring it to Cebu , where it all began under the worst of circumstances. Finally, after touring the world’s film festivals and reaping laurels left and right, Give Up Tomorrow came home to Cebu and had its very first screening there last Wednesday, September 26, at the Marcelo B. Fernan Press Center.

In Metro Manila, some theater managers fortunately realized how important it is for many Filipinos to see this eye-opening documentary.Give Up Tomorrow will be screened exclusively at Robinsons Galleria and Robinsons Ermita from October 3 to 9, and at Trinoma, Greenbelt 3, and Alabang Town Center from October 5 to 7.

A regular theatrical run in Cebu may yet happen if enough Cebuanos are ready to revisit a traumatic past and call into question what has long been considered there as justice served.

With theatrical playdates in New York City on September 28 and Metro Manila on October 3, Give Up Tomorrow is screening in New York , Manila and Cebu all in the same week. 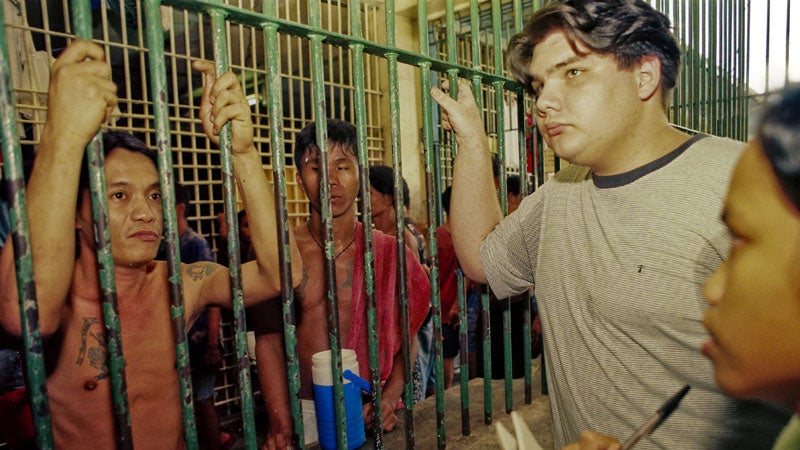 This file photo shows Paco Larrañaga behind bars, being interviewed by a news reporter, shortly after he was arrested for the kidnap, rape and murder of two sisters in Cebu City. ARNI ACLAO/Contributed Photo