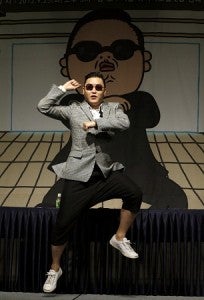 SEOUL, South Korea—South Korean rapper PSY finds his success with “Gangnam Style” so unreal that he wonders if he’s being tricked into believing it — like Jim Carrey in “The Truman Show.”

PSY said Tuesday in a press conference in Seoul that he cried in disbelief when his song entered the Billboard 100 earlier this month. The 34-year-old now says he’ll go topless in joy on a stage if “Gangnam Style” tops the chart. The song’s at number 11 this week.

The music video for “Gangnam Style” has more than 270 million YouTube views and counting. People around the world are mimicking PSY’s horse-riding dance in the video.

In the 1998 movie “The Truman Show,” Carrey plays a man unaware that he lives in a reality television show.