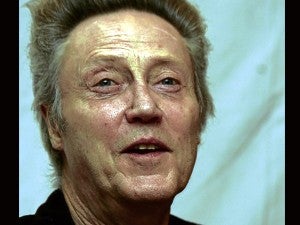 LOS ANGELES—Christopher Walken and his trademark gravity-defying hair arrived almost at the same time in a Toronto hotel meeting room. Well, it only seemed that the lacquered pompadour came into the room first, because it’s always the first thing we notice whenever we encounter the great actor.

“I’ve thought about my hair as an attention-getting device,” admitted Christopher. “Somebody once told me that the best actors have a big head. I never had a big head, so I thought I’d make my head look bigger.”

Christopher is one of the “Seven Psychopaths” in writer-director Martin McDonagh’s comedy about dognappers who steal pets and return them for reward money. Christopher and Sam Rockwell snatch the shih tzu of a gangster (Woody Harrelson), which complicates their little “business” and entangles their writer-friend (Colin Farrell), as well. Tom Waits, Olga Kurylenko and Abbie Cornish are also in the cast of this latest film by award-winning playwright Martin, who directed “In Bruges.”

“It’s for other people to decide if you’re a psychopath,” declared Christopher. “I’ve played a lot of strange, twisted people. But, in fact, my life is very normal. I’ve been married for 46 years (43, going by online biographies that state he wed Georgianne Walken in 1969). I pay my bills, and my cat loves me. I just play psychopaths.”

Asked if he agrees with Gerard Depardieu’s belief that “to be a good actor, you have to be crazy,” Christopher replied in his distinctive voice and cadence, “I don’t think everybody has to be crazy, but Depardieu is one of the world’s great actors. There are maybe five actors in the world that you could say are great, and he’s one of them. He keeps retiring, then he comes back—which is nice.”

Christopher himself got enthusiastic comments when we asked Colin and Sam about their “Seven” costar. Colin said to us, “Walken is hard to describe. He’s about the most unique person I’ve ever met.”

“I know Chris really well now,” Sam said. “I have a strange relationship with him, because he’s my hero. He’s iconic. He’s among guys like Robert DeNiro and Gene Hackman. The thing that makes him different is that he’s more of a stage animal.”

Sam laughed as he shared, “There are so many moments I’ve had with him that are precious to me—some stories I can’t really tell.” He said, “He’s a lesson in spontaneity as an actor. He’s a dangerous actor. The thing that makes him dangerous is that he’s risky. He takes chances.”

Christopher was all praises for his film director and play author. “Martin is very talented and unique,” he said. “People who go to the theater consider him one of the top guys.”

The man has been performing since the late ’40s. “I have been in show business since I was 5 years old,” he declared. “I’m still doing what I always did. When I got out of high school, I really had nothing to do but to continue acting. I was in musical theater, then I became an actor in plays. Thereafter, I started to make movies. My career is a bit of an accident—a nice accident.”

Christopher’s “accidental career” took him from being a child actor to being a dancer in musicals. He recalled, “I got a job in a summer touring show of ‘West Side Story.’ I was a Jet. They all had their girlfriends. In the musical that summer, my girlfriend (Georgianne), who was also a dancer, became my wife.” He sounded proud when he mentioned that he has been married to Georgianne, a casting agent, for four decades.

On special memories in his career that’s marked by noted performances in “The Deer Hunter,” “The Dead Zone” and “King of New York,” Christopher said, “You do a job and, most of the time, it’s immediately almost obscure. Once in a while, everybody likes it. How that happens is mysterious. Marlon Brando used to say that show business is a roll of the dice.”

Fatboy Slim’s “Weapon of Choice” music video, which features Christopher dancing, refuses to fade into obscurity. The 2001 MTV and 2002 Grammy award-winning video has millions of hits on YouTube.

The actor recounted how he ended up on that viral video: “I had made a musical called ‘Pennies from Heaven.’ The director of the video, Spike Jonze, saw that and said, ‘Christopher can dance. Ask him to do the video.’ I rehearsed the dance every day for three weeks with the choreographer. Then, we went to the location. We shot very quickly. I think we made the whole thing in 12 hours.”

In the very normal world of Christopher Walken and its enduring marriage, what are the rules he lives by? “Take care of yourself—eat good, sleep, not too much stress. Don’t be greedy!”