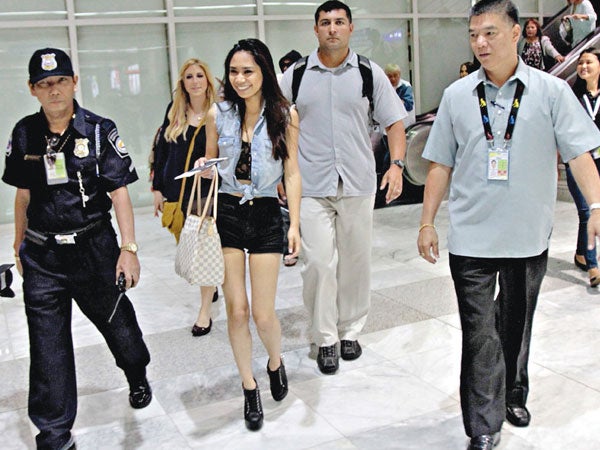 “There are lots of casinos, and pretty girls,” quipped Heejun Han, one of the Top 10 finalists of “American Idol” Season 11, when asked of his first impressions upon landing on Philippine soil.

Heejun, 23, joined the rest of the youthful, bubbly “Idols” at a press conference Tuesday at the Manila Hotel for their concert on Friday, at Smart Araneta Coliseum. The show is the last and only Asian date of the group’s 45-city tour of the United States.

In 2010, the “American Idol” live tour—which featured grand winner Scott McCreery and 10 others, including 11th-placer Filipino-American Thia Megia—debuted in Manila for two nights, also at the Big Dome.

Friday’s concert is made more significant by the presence of another Filipino-American, Jessica Sanchez, the 2012 “Idol” runner-up who almost snagged the title from her main rival, Phillip Phillips.

Born and raised in the United States to a Filipino mother and a Mexican-American father, Jessica—easily the most popular among the Idols due to her local lineage and jaw-dropping vocal power—said she would be staying behind for about a week after the concert.

“I’ll be shooting some product endorsements,” she said, but expressed regret that she might not be able to visit her mom’s hometown in Bataan province.

She held back when the Philippine Daily Inquirer asked whether she would be doing a commercial for leading food chain Jollibee, explaining that she couldn’t reveal anything yet, except for clothing brand Bench which announced it recently on social networking sites Twitter and Facebook.

Jessica likewise did not confirm whether she was indeed being considered to play the lead role of Kim in the film version of the award-winning stage musical “Miss Saigon,” although she said: “I would love to try (auditioning).”

Regarding reports that she was set to appear in the popular musical-comedy-drama TV series “Glee,” Jessica replied: “Nothing’s confirmed … But it’s in the works.”

The petite powerhouse singer, who just turned 17 last month, showed none of the trappings of fame that came with her worldwide exposure on “Idol.”

Dressed in a simple, cut-off denim shirt and black shorts, the only noticeable pop-star item in her wardrobe was her pair of silver spikes-studded high-heeled shoes.

She pointed out that she ate more Filipino food than Mexican fare at home in San Diego, California. Asked what her favorite Pinoy dish is, she struggled with her Tagalog: “Sinigang na … the one with pork.”

She admitted that she couldn’t learn the Filipino language because it was not spoken at home, “although my grandpa does, but he speaks so fast.”

If there was any instance during the “Idol” competition that made her realize that joining it had changed her life, Jessica paused for a moment before saying: “The gruelling moments … when we were all pushing to do something that we really wanted.”

Asked what would they be doing if they didn’t get into the show, each of the “Idols” gave different answers—except for Jessica, who said, “This is what I want to do for the rest of my life. It’s been in my head since I was 10.”

The rest of the “Idols” affirmed the life-changing status they felt during and after the show.

“(After) being eliminated, we appeared on talk shows and people started noticing,” said sixth placer Elise Testone. A veteran of the South Carolina music scene, Elise, 29, is a vocal coach aside from being a talented musician who can play the piano, guitar, drums, cello and tambourine.

“Meeting the fans while on tour was definitely memorable,” admitted 10th placer Erika Van Pelt, a native of South Kingstown, Rhode Island. Apparently the most adventurous fashion-wise, Erika, 26, said she dyed her hair red because she was “feeling fiery” en route to the Philippines.

“Idol” title holder Phillip Phillips—who revealed that his debut solo album is due for release in December—confessed that “everything still isn’t real for me. I still get nervous when performing.”

But the 21-year-old singer-songwriter from Leesburg, Georgia, who stood out in the competition for his ability to arrange his material, added that “the tour has made me feel at home in the cities that we visit. It’s been a long year but a lot of fun.”

Eighth placer DeAndre Brackensick, 17, said he “can’t wait to eat balut.” Born in San Jose, California, to a European-American father and an African-American mother, DeAndre did not join the group interviews because he was not feeling well, organizers said. He is currently the apple of Jessica’s eyes.

Seventh placer Colton Dixon, 20, appreciated the fact that he has collaborated on some songs with Jason Wade of the Los Angeles rock band Lifehouse. He said he’s looking forward to the eventual release of the songs.

Of the 10 Idols, it was third placer and Louisiana native Joshua Ledet who greeted the Philippine media with “Mabuhay!” He added that he learned another Filipino word, but couldn’t remember it at the moment.

It remains to be seen whether this batch of Idols would pull in a capacity crowd at the Big Dome concert on Friday.

Although “Idol” has been highly rated since it debuted on television in 2002, audiences are now only about half the more than 30 million who watched regularly in the show’s 2005 and 2006 heyday.

The last season finale in May drew a record low of 21.5 million viewers and “Idol” lost its prestige as the most-watched program on US TV to “Sunday Night Football.”