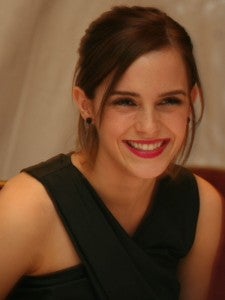 Emma, who is blossoming into a beautiful woman, added in our interview at the Fairmont Royal York Hotel, “I haven’t seen the script. No offer was made to me. It’s completely a nonexistent thing. The problem with the Internet is that one person writes something and then it’s this crazy domino effect where  everyone keeps repeating the same thing and assumes that it’s true.”

Reminded that she told us a few years ago that she wasn’t sure if she wanted to stay an actress, Emma laughed and replied, “I was hedging my bets basically. Yes, I have made up my mind.”

And Emma the actress has been busy in her post-“Harry Potter” life. She stars in “The Perks of Being a Wallflower,” director Stephen Chbosky’s adaptation of his own wildly popular young adult novel. The coming-of-age story set in the ’90s also stars Logan Lerman, as Charlie, whose freshman year in high school the movie follows, and Ezra Miller. For Emma, making the movie felt like experiencing high-school life which she missed because she was busy doing the “Potter” movies.

“Even though I wasn’t a teenager when I made this movie, we stayed at this place called the Crowne Plaza in Pittsburgh,” Emma shared. “All our rooms were connected down one hallway. So, Ezra and I opened up the doors in between our rooms. Essentially, we turned the ground floor of the Crowne Plaza into a hippie commune. I was running around trying to play mom and feed everyone. By the end of the movie, I was deliriously exhausted.”

Cutting her hair short was symbolic of her break from Hermione. “It was nice for me to have some time away from being Hermione to create my own identity a bit,” she said.

Emma noted with a smile that now, she has to grow her hair long again for new roles. “I’m playing other roles that require long hair,” she explained. “But it’s nice to spend some time getting to know me. Definitely, it has been good.”

Emma exulted in the fact that she’s been able to travel more because of the various movie projects she’s been involved with. She shot “Perks” last year, did “The Bling Ring” this year and now, she’s filming Darren Aronofsky’s “Noah.” “I haven’t really been in one place for very long,” she said. “I did seven weeks in Pittsburgh. I did seven or eight weeks in Los Angeles. I did a week or two in New Orleans. I’ve just done three weeks in Iceland.”

By coincidence, Emma gets to work with Logan in both “Perks” and “Noah.” She speaks highly and fondly of the actor. “Logan and I have a very deep sense of trust with one another which, as actors, is amazing because I know that whatever I do, he’s going to be there to catch me and vice versa,” Emma enthused. “We spent so much time together making the movie. Our chemistry was really good in ‘Perks’ I think Darren saw that and wanted that for ‘Noah.’

“I hope I’ll work with Ezra and Logan many times throughout my career,” Emma volunteered. “They’re both very special and interesting actors. What we have off-screen really helps what happens on screen.”

Asked to share more details about “Noah,” which Oscar-nominated Filipino-American cinematographer Matthew Libatique is lensing, Emma said, “I play the role of Ila, Noah’s adopted daughter who is in love with Shem, his eldest son. Logan plays Ham, who is Shem’s youngest brother. So Logan plays my brother.”

“Darren dreamed about making the film for a long time,” Emma said of Darren and his pet project, which has Russell Crowe playing the titular biblical character.

In Sofia Coppola’s “The Bling Ring,” Emma is Nicki in the true story of a group of glitz-obsessed teens who burglarized the homes of celebrities, including Lindsay Lohan and Paris Hilton. Emma feels that the cult of celebrity is a perfect match with the director, Sofia, who grew up in the limelight as Francis Ford Coppola’s daughter.

Emma revealed that she fought hard to win the role based on the actual Bling Ring’s Alexis Neiers. “Sofia writes great roles for women,” she said. “I was excited by the idea of working with her. I read the script. I became absolutely desperate to be in the movie because it meant I got to be in the shoes of something opposite of me.”

Emma admitted that she reveled in playing someone who was so unlike her. “It was really dark playing her but also fascinating,” she remarked. “I love the fact that Sofia made the movie in a nonjudgmental way. The characters are very human. No one in the movie is black or white. I knew I was the least obvious choice for the role. I felt that I had to campaign for it because of the idea of British Emma Watson playing an LA Valley girl and a yoga instructor—a pole-dancing, juice-cleanse-drinking girl. Sofia totally saw it, so that was awesome.”

On her life away from movie sets, Emma enumerated her various artistic outlets: “I paint. I draw a lot. I do art and I dance a bit. I see friends. I try to watch as many films as I can. My film knowledge isn’t probably where it should be. I try and keep a reasonable balance. I know it’s important. Otherwise, you burn out and you lose your creativity.”

When will she finally get her college degree? “I’ve got a semester left,” Emma answered. “I’m achingly close to being on the home straight. The idea is that I’ll finish ‘Noah’ in November. Then I’ll take Christmas off and I’ll go back (to Oxford) early next year.”