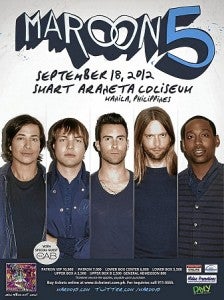 MANILA, Philippines—Maroon 5 is soon headed back to Manila! Catch this Grammy Award-winning quintet composed of Adam Levine (vocals/guitars), James Valentine (guitars), Mickey Madden (bass), Matt Flynn (drums) and PJ Morton (keyboards) as they bring their “Overexposed Tour” to the Philippines, with special guest The Cab, on Sept. 18 at the Smart Araneta Coliseum.

Since the album’s release last June, tickets for the band’s third concert in the country have been selling out fast.

With millions of albums sold and numerous chart-topping hits, it’s no surprise that Maroon 5 has reached international prominence and recognition. Gone are the days of trying to fill small L.A. clubs as the group takes on arenas and stadiums with thousands-strong attendance. Yes, the band is now a worldwide sensation, but they have managed to keep their feet on the ground and acknowledge—with humor—that they are “overexposed.”

“Overexposed,” the title of Maroon 5’s latest album, was an inside joke. With front man Adam Levine’s venture into television as a mentor in the hit reality show “The Voice,” Maroon 5 has reached the stage where their popularity has become increasingly hard to deny.

“It’s like ‘We get it, we’re overexposed,’” Levine says with a laugh. “We’re just trying to preemptively go where the conversation is headed anyway. We figured we’d get there first.”

Their phenomenal hit, “Moves Like Jagger,” a song that went down in history as one of the most paid downloaded songs, prompted the band to explore the idea of cowriting. The underlying message of their new album’s title captures the band’s willingness to take their music a step further, a representation of the risks they’ve taken.

“I feel like we’ve been standing on the edge of a cliff for a long time,” Levine says. “We’re a band that’s always been close to being full-on pop, but that’s rooted in a lot of other things—rock, soul, funk, and the list goes on. ‘Overexposed’ is the first time we’ve ever completely embraced the idea of making pop music, of making songs for the radio. We just said, ‘Let’s not be afraid to do what we basically are.’”

Of all the band’s albums, “Overexposed,” says Levine, feels “both most and least like Maroon 5. There are lots of traces of the past, but it also hints at the new. More than anything, I think this record says that it’s always cool to try—that you should always be willing to take a step beyond whatever feels comfortable.”

The album features collaborations with well-known producers Max Martin (the album’s executive producer), Benny Blanco and Ryan Tedder. The single off of the new album, “Payphone,” is an incredibly catchy song that features rapper Wiz Khalifa. Indeed, they’re heading over to the “pop” direction with heads held high.

“I love how ‘Payphone’ seems like a such sweet song until the chorus comes in,” Levine says, referring to the part of that tune where he declares: “All those fairy tales are full of shit / One more f—king love song, I’ll be sick.” “It’s totally subverting the song in this way that makes you lean in and listen,” he adds.

Whether it’s a new approach to songwriting or a new direction, there’s still one thing that remains true. It’s that Maroon 5 continuously creates great music. This fact is undeniable. With many Filipino fans awaiting their return, Maroon 5’s “Overexposed Tour” is set to reaffirm that fans will continue to support the music that the band makes—whatever the genre.

The concert is presented by Midas Promotions in cooperation with Dayly Entertainment. Tickets available online at ticketnet.com.ph. Call tel. 9115555 for inquiries.