The ‘American Idol’ tour is ready for Manila 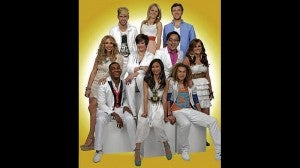 “American Idol Live! Tour 2012” brings together on the same stage on the same night the powerhouse cast of 10 new discoveries in the hit reality singing competition in their first Asian engagement following a 45-date US tour that took them to major cities in North America.

The Top 10 finalists are expected to perform some of the numbers they did during the four-month talent search, with Sanchez drawing from her song list that includes, among others, “Change Nothing,” “Sweet Dreams” and “I Will Always Love You.”  An online post of the tour’s repertoire indicates that Sanchez has seven production numbers and three solo spots.

Renen de Guia of Ovation Productions said: “We are delighted to bring to Manila for the second consecutive year the touring production of ‘American Idol,’ this time to showcase its Season 11 Top 10 finalists and give Filipino fans another unique opportunity to watch up close and personal the latest crop of singing discoveries in the top-rated reality search.”

“We are also very excited to help realize the fond wishes of millions of fans to see and meet in person their kababayan and new singing star, ‘American Idol’ runner up Jessica Sanchez, who will be part of the cast,” De Guia added.

Season 11 of “American Idol” has generated special interest and attention among Filipinos here and overseas not only because of the spectacular performance of Sanchez but because of her family’s ties to the Philippines, where her mother hails from before she moved to the US and settled with her Mexican-American husband and her family.

Filipinos in America and other parts of the globe joined the groundswell of support for the then 16-year-old Fil-American sensation (she turned 17 last Aug. 4) and cast their votes through the telephone, the Internet and SMS text messaging in a rare show of solidarity for a common cause of making a talented Filipino bag an international award.

On May 23, 2012, during a live telecast from the Nokia Theatre in Los Angeles, California, the results showed Sanchez emerging as second place to Phillips after 132-million votes were cast by the viewers.

Before joining “American Idol,” Sanchez, who started singing at the age of 12, competed in the first season of “America’s Got Talent” at the age of 11.

She has signed a record deal with Interscope Records and is currently working on her debut album that is due for release in October.