Waiting for Lolita and Marlene 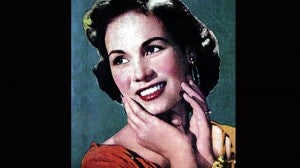 RODRIGUEZ. Should return to acting.

JACKIE De Los Reyes, 58, caterer: “I am a huge fan of old movies and, as far as I’m concerned, no one comes close to real dramatic acting than my idols, Lolita Rodriguez and Marlene Dauden.

“For many years now, I’ve been trying to get copies of their old movies, but to no avail. I hope they will soon be available on DVD. I don’t know if they’re still willing to act, but I wish that they’d be given another chance, so they can share their unique skills with the new generation!”

Cathy Lardizabal, televiewer: “Agot Isidro has gone a long way—from being a backup singer to going solo. But, I never thought she could act well, until I watched her in a recent episode of ‘One True Love,’ where she had an intense confrontation scene with Raymond Bagatsing!”

Rosie Daguman, housewife: “Where are the lovely and talented likes of Pilar Pilapil and Rio Locsin? I want to see them in teleseryes. One reason I’m no longer interested in watching soaps is because I see the same actors and actresses doing minor variations on similar roles over and over again.”

Luis Ramos, student: “Initially, I wondered why Zendee Rose Tenerefe, dubbed YouTube’s Random Girl, became an Internet sensation. After watching her videos, where she sang before mall shoppers, I found out why: She has a strong and solid voice.

“Luck is on Zendee’s side. She recently appeared in a musical variety show on TV and was reportedly invited by Ellen Degeneres to appear in her show. Here’s hoping that she and her handlers play their cards right.”

ADVERTISEMENT
Read Next
The movies they’re making
EDITORS' PICK
Notice of 2020 regular meeting of stockholders June 18, 2020
SM prepares for ‘safe malling’
Leveling up your ‘lutong bahay’ with the kitchen companion you never knew you needed
NBI, Immigration to join hunt for ‘underground’ medical clinics
2 Chinese nationals arrested in raid on another unlicensed COVID-19 hospital in Pampanga
P2.2 trillion in losses: Cost of COVID-19 impact on PH economy
MOST READ
Revillame tells Roque: ABS-CBN is in my heart despite being in rival network
NCR is ready for GCQ — Palace
LOOK: Robredo, Vico Sotto, check Community Mart ops in Pasig
Año: Quarantine passes not needed in GCQ, movement restricted to essential travel
Don't miss out on the latest news and information.