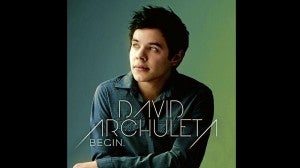 Listening to David Archuleta’s fifth album, “Begin,” his followup to the OPM-fueled “Forevermore,” is an uneven experience. True, it’s hard to find fault with the “American Idol” alumnus’ voice, which only gets better with age and experience. But, singing isn’t just about hitting the notes correctly—it behooves every performer to “relay” the message of his song well.

Take “True Colors.” The voice of Cyndi Lauper, who first sang the No. 1 hit tune in 1986, is nowhere as strong as Archuleta’s, but the songstress’ version manages to go beyond scratching the surface of its pretty lyrics.

To be sure, David’s revival isn’t bad—but, while it’s seamlessly and sincerely rendered, it lacks the soul that Lauper’s original has in heaps! This becomes even more obvious in Archuleta’s perfunctory cover of Paul Simon’s “Bridge Over Troubled Water.”

The young singer is at his most powerful when the complex portions of a song take him out of his comfort zone, as is apparent in his impeccable remakes of Keane’s “Somewhere Only We Know” and REM’s provocative “Everybody Hurts,” in which his malleable pipes twist and stretch to accommodate the tricky notes that make them tick.

Also deserving of music lovers’ rapt attention is the soothing and ingenious way that his pliable tenor voice glides along with the rippling synth of U2’s “Pride (In The Name of Love).”

In his folksy, evocative cover of Peter Gabriel’s “Don’t Give Up,” he sings with Libby Linton, whose Clair Marlo-like trills eerily complement Archie’s buoyant crooning. “Broken,” the beautiful-but-bland ballad the 21-year-old singer cowrote with Jon Hunt, shows off the lush allure of his falsetto.

Cynics and believers alike will find bursts of inspiration in the repertoire: Archuleta recorded “Everybody Hurts” a day before he began his self-imposed hiatus in show biz—to take part in a two-year mission for his religion. David himself isn’t sure what to expect from the experience: “Do I really need to go? I feel from the bottom of my heart that this is something that I need to do!”

Will his fans still be around after he fulfils his “mission?” David offers no answer—but, his leap of faith is best conveyed by his sparkling remake of Sarah McLachlan’s “Angel”: “Let me be empty/ Oh, the weightless/ Maybe I’ll find some peace tonight.”