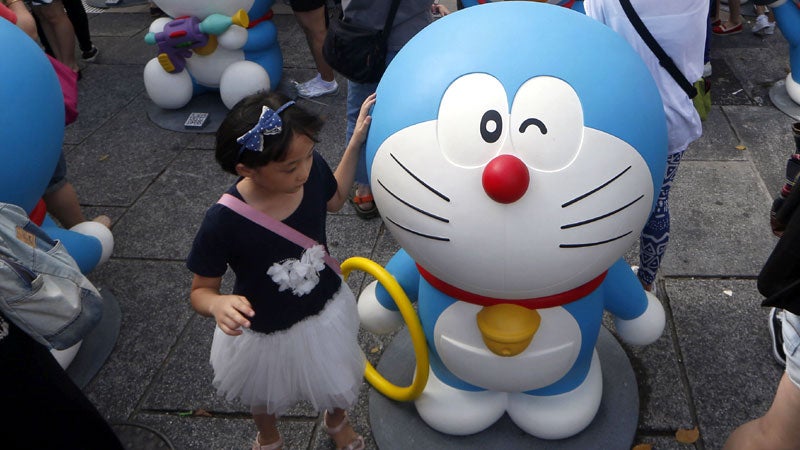 Fans pose with figures of Doraemon, a famous Japanese cartoon character, during the “100 Years Before the Birth of Doraemon” exhibition in Hong Kong, Thursday Aug. 16, 2012. Doraemon is one of Japans most popular comic and animation characters and his appeal extends across Asia. He first appeared in 1969 and the robot cat from the future has starred in numerous TV series and movies ever since. He is such an icon that he was appointed Japan’s cultural ambassador for animation in 2008. Being from the future, Doraemons date of birth is Sept. 3, 2112, meaning 2012 marks the start of the 100 year countdown to his birthday. AP/Kin Cheung

TOKYO – Doraemon, Japan’s robot cat from the future, will celebrate turning minus 100 years old by being given official residence of the city where he will be born, a city official told AFP on Friday.

The electronic blue feline, whose cartoon exploits have captivated children across Asia, is to be given a residency certificate for Kawasaki, a city near Tokyo, on September 3, exactly a century ahead of his supposed birth.

The city, in which the character’s creator lived, is also home to a popular museum of all things Doraemon and plans to issue copies of the time-travelling robot cat’s residency certificate to fans and visitors.

“Doraemon was created and born in Kawasaki city. In that sense, he has always been a city resident,” Mayor Takao Abe told reporters, according to the online edition of the local Kanagawa Shimbun newspaper.

“I hope (the residency certificate) will bring the museum closer to many people,” he said.

The certificate will give Doraemon’s birthday as September 3, 2112, as well as listing his likes – pastries – and his dislikes – mice.

Doraemon was sent back in time from the 22nd century by a young boy who wanted to alter his family’s historical misfortune.

His magic pocket provides an endless supply of fantastical gadgets that help his young friend Nobita Nobi navigate the trials of everyday life.

The character first appeared in manga strips in 1969, making the transition to small and big screen over the following decades.

The cartoon series also has a large following in the rest of Asia, including in China, Taiwan, Hong Kong and South Korea.