Andrea Torres: The wait is over 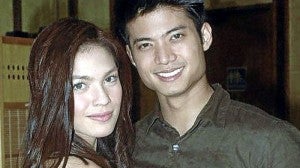 TORRES with screen partner Mikael Daez: She gave herself a deadline to make it in the biz.

Young actress Andrea Torres once got so depressed at work that she thought of quitting show biz. Thank heavens, she didn’t. Andrea was recently picked to play the lead in GMA’s new afternoon drama series, “Sana Ay Ikaw Na Nga.”

“There was a point when I asked myself if I really had a future here. I gave myself until age 24 or 25. If nothing happened, I’d start looking in another direction,” Andrea, 22, told the Inquirer during a media gathering for her and screen partner Mikael Daez.

She joined the biz at age 15, first appearing on the defunct youth-oriented show “Ka-Blog.” She was later cast in the shows “Spooky Nights,” “Blusang Itim” and “My Beloved” and featured in the movies “Shake, Rattle and Roll” (Parts 9 and 10), “Loving You,” “Manay Po 2,” and “You To Me Are Everything.”

She finally landed the role of Cecilia Fulgencio in the remake of the 2002 drama series “Sana Ay Ikaw Na Nga.” “I waited for this for so long,” she said. “And now I’m feeling the pressure. I’m working twice as hard to prove that I deserve it.”

The downside is that Andrea, a Communication Arts student at the University of Santo Tomas in Manila, had to temporarily quit school. “When I told my parents, they immediately agreed, but my dad made me promise to finish school eventually. They understood that opportunities in this kind of work come to you at a certain age and you just have to grab it.”

Andrea explained: “A third-year (college) student’s workload is heavy. We are required to make a short film and log long hours in the editing room. We are out of the classroom most of the time. I don’t want to be unfair to my classmates—they may have to do school projects without me.”

GMA 7 required Andrea to work three times a week for “Sana…” during its pilot week, and twice a week for the remaining episodes.

Andrea will play both the real and fake Cecilia in “Sana…,” after the character figures in a bombing incident in the story.

Andrea appeared bemused during this chat with the Inquirer. She even admitted to finding herself “staring into space sometimes,” not believing that her big break had finally come.

She said: “It’s a good thing I didn’t lose hope or just decided to quit. I’m glad I still believed this would happen to me.”