A movie about love in all its stages | Inquirer Entertainment

A movie about love in all its stages 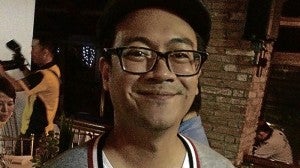 Creating the musical “I Do Bidoo Bidoo: Heto nAPO Sila” was such a challenge that it took writer-director Chris Martinez over a year to finish the script and about five years to develop the film.

“Ito na ang pinakamatagal kong isinulat (It took me the longest time to write this script),” Martinez told the Inquirer.

He explained that this was because he had to go through the enormous collection of tunes by the Apo Hiking Society for the movie.

“I initially chose 21 songs but had to trim the list down to 17 or 18 to fit the movie,” he added. “This had to be done because all the songs will be heard in full.”

Martinez said the film was a dream project for Unitel Productions’ Tony Gloria, who was responsible for producing classics like “Working Girls,” “Bagets,” and more recently, “Crying Ladies.”

He added that the idea for a local musical came to Gloria after watching a stage production of “Mamma Mia.”

Martinez—who is an in-house talent of Unitel—and Gloria started talking about the project four years ago. While writing the script, the director said he tried to learn more about the music of Danny Javier, Jim Paredes and Boboy Garovillo, collectively known as the Apo, to find inspiration for the story.

“Most of the group’s hits are about love—profession of love, unrequited love, lost love, love that you just can’t resist,” Martinez pointed out.

“I Do Bidoo” comes on the heels of the box-office success of “Kimmy Dora and the Temple of Kiyeme,” which Martinez also wrote under the direction of Joyce Bernal.

“That film was very special because it was really hard to create,” Martinez recalled. “The first one had been very successful, and we couldn’t just put all of its elements to the sequel. We consciously made the second film look different. We infused horror in comedy.”

Martinez said it was also a challenge to “bring back” the characters Kimmy and Dora Go Dong Hae, both played by Domingo, and to “push the story forward” from where it left off in the first movie.

“It was good that the sequel had that horror-thriller feel,” he said. “It sort of liberated the story from its original form. For Part 3, I can now take it anywhere!”

E-mail the author at [email protected]