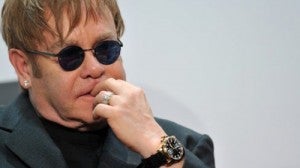 LONDON – Elton John believes his son Zachary’s childhood is going to be “very difficult”, battling homophobia and the impact of his father’s fame, the pop icon said in an interview published Tuesday.

The 65-year-old British star and his Canadian civil partner David Furnish, 49, became parents on December 25, 2010. to a child conceived using a donor egg and born via a surrogate mother.

But the singer-songwriter said he was preparing himself for what would be a tough time growing up for his son, who is now 19 months, he told the weekly British magazine Radio Times.

“At school other children will say, ‘You don’t have a mummy’,” John said.

“We’ve come a long way, but there’s still homophobia and will be until a new generation of parents don’t instil it in their children.”

He added on his son’s upbringing: “It’s natural for him. He calls me ‘Daddy’ and David ‘Papa’.”

John, whose 1997 remake of his 1973 hit “Candle in The Wind” sold 33 million copies, said the toddler did not yet have an understanding of his father’s fame.

“Being the child of someone famous is a huge ball and chain around your ankles. It’s going to be very difficult.”

John explained how he was trying to give his son a musical upbringing.

“I want music to be a huge part of his life. I sit him on my lap and he doesn’t bang the piano,” he said.

“He tries to copy me but he’s not formed enough yet to know what I do, thank God.”

John said that he introduced Zachary to classical composers Chopin, Mozart and Beethoven — as well as the children’s song “Nellie The Elephant” — at a very young age, but that his son was more interested in football and cooking.

“I won’t push Zachary into anything. So far, he just loves kicking a ball and watching people cook,” he said.

John also praised Madonna — despite recently reigniting his spat with the US singer in an Australian television interview when he said she looked like a “fairground stripper” whose career was over.

“Madonna took the industry by the scruff of the neck, made opportunities for other women, like (Lady) Gaga and Katy Perry,” he told the Radio Times.

He said of his own singing career: “I would (give up) if I felt the voice had gone, but at 65 it’s getting better and I’m in the prime of life.”

John has sold more than 250 million records in a career spanning four decades and he was inducted into the Rock and Roll Hall of Fame in 1994.