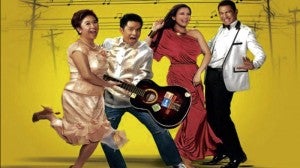 “I DO BIDOO BIDOO.” Screen musical features the songs of APO.

IT’S been a full decade since the slump in mainstream Filipino film production drastically reduced our Filipino film output from a high of 200 to the dismally low number of only around 40 or so per year.

To address this problem, the Cinemalaya indie film festival and competition was put up, to fund the production of budget but significant feature films. Other funding groups have since joined the movement, which has been so effective that budget indies now make up the majority of the 70 or so feature films produced here each year.

The indie movement has become so successful that mainstream producers have learned a thing or two from it, and the latest piece of good news this year is that they are making more movies now than last year. In fact, this month, there are five mainstream-funded feature films opening in town—“The Reunion,” “Guni-guni,” “Just One Summer,” “Mga Mumun-ting Lihim” and the APO movie, “I Do Bidoo Bidoo.”

To be sure, these are relatively “small” productions, but at least they enable actors and production people to work, make money and feed their dependents.

In particular, we’re hoping that “I Do Bidoo” lives up to its promise so that, like Abba and  “Mamma Mia,” the best songs written by acclaimed Filipino composers can energize the local musical film scene.

For its part, “The Reunion” topbills young hunks like Enchong Dee and Enrique Gil in a bittersweet tale of batchmates years after graduation, experiencing the occasionally harsh realities of life. Other lead roles are played by Kean Cipriano, Xian Lim, Jessy Mendiola and Megan Young.

The new horror film, “Guni-guni,” is interesting because it showcases the directorial promise of Tara Illenberger. She first made her mark in the movies as a film editor, so we’re eager to see if her work on “Guni-guni” proves our contention that many former editors make outstanding directors, because they have mastered film language and visual storytelling. Illenberger’s new chiller topbills Lovi Poe and other young leads.

“Just One Summer” is interesting and perhaps instructive in a different way—it launches the love team of Julie Anne San Jose and Elmo Magalona on the big screen.

Julie and Elmo are teen faves on TV, so it’ll be exciting to see if their romantic tandem has what it takes to “translate” its success to the movies. If they do really well, they could become the next Guy and Pip, or Vi and Bot! OK, that may be a bit much, but that’s for their diehard fans to prove or disprove.

Finally, Joey Reyes’ Cinemalaya film, “Mga Mumunting Lihim,” is “graduating” to mainstream release in some theaters. Its stellar cast has made the moveover engagement possible. We hope the film pulls in viewers, so other indie productions can make the same transition.

Indies do well in festivals, but it’s on the mainstream theater circuits where the real money is made.