‘King’ of the world 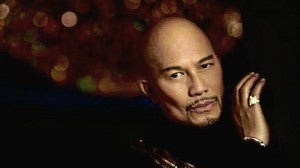 Onstage, singer-actor Leo Tavarro Valdez feels and looks every inch like the “king” of the world. Make that king of Resorts World.

Sharing the role with Bimbo Cerrudo, Valdez has been cast as the Siamese monarch in “The King and I,” which goes onstage at the Newport Performing Arts Theater of Resorts World Manila, beginning September 15.

Like his leading lady Monique Wilson (who shares the role of British governess Anna Leonowens with Sheila Valderrama), Valdez is preparing for the “King”-sized challenge with rigorous cardio workouts.

Wilson said she had gone back to jogging.

Valdez explained: “Physical stamina is important … not just because of all the running around onstage, but so that we can keep up with the draining rehearsal routine.”

Good thing he has always been into running, “to maintain good health, to keep in shape and get back in shape.” Fitness is like a “second religion” to Valdez. “It’s a huge part of my daily lifestyle routine.”

Beyond the physical demands, he is priming himself by reading up on the Thai king depicted in the play, Mongkut Rama IV. He has discovered, that contrary to the famous depiction onscreen, the King was a “progressive” monarch.

“The real King was a good person with an amazing vision for his kingdom,” he related. “I have seen the Yul Brynner movie version many times and the Chow Yun-Fat interpretation as well. It was instructive to see how these two different actors gave their own takes on an iconic role.”

He considers the songs in the musical as “some of the most beautiful ever.”

His favorite, however, is not one of the King’s, but “Something Wonderful,” sung by head wife Lady Thiang. “In our show, it’s performed wonderfully by Gina Respall, who appeared in the London and UK tour productions. It still gives me goose bumps every time I hear it.” 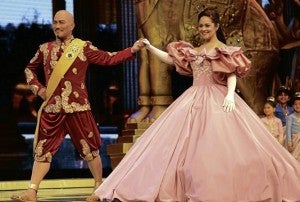 LEO Valdez and Monique Wilson in Resort’s World’s “King and I”. Photo from http://eduysblog.blogspot.com

Last time they worked together was in “Chess,” mounted by Wilson’s New Voice Company in 1996.

“I have always admired Monique as an actor and as a person. Although I haven’t worked with her in ‘Miss Saigon,’ I have always considered her as part of my ‘Saigon’ family. What a joy to act with her again,” he remarked.

(Wilson was part of the original London staging of “Saigon”; Valdez played the Engineer in a succeeding production.)

He is also reunited with stage director Freddie Santos in this play. “He is one of the hardest working directors I know. I’m delighted to work with him again so soon after ‘Broadway Showstoppers,’ my concert in Resorts World last year.”

The kids in the show have also charmed Valdez. “They’re adorable on- and off-stage. They blew me away. Not one kid is a fraction off when they sing together. They are so smart. The kids alone are already worth the price of admission.”

He offered precious advice to budding performers. “It is the love of the craft that will see them through. There are no small roles as everyone is part of a whole. If they become a big star, they should never forget why they went into the performing arts in the first place.”

He added: “Also, they should respect co-workers, big or small. Lastly, talent will out, but to achieve excellence, there is absolutely no substitute for hard work.”

Although he has performed all over the world, nothing beats a “rousing ovation” from his countrymen, he said.

“Filipinos are among the best [if not the best] audiences in the world. You have to up your ante because Filipinos are musically discerning. It’s challenging, but rewarding if you’re able to impress the local crowd,” he asserted.