Stepping out of famous parents’ shadows 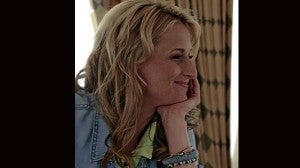 MAMIE Gummer is blessed with the elegant looks and good sense of her mother, Meryl Streep.RUBEN NEPALES

LOS ANGELES—Today we feature two talents who are making it on their own amid the huge shadows cast by their respective prominent parents.

Travis is the lead animator of the 2009 fantasy-horror children’s film “Coraline,” and this year’s adventure flick “ParaNorman,” as well as president and CEO of Laika, the studio that made these two stop-motion animated movies.

In our recent interview, Travis said: “The Knight boys have a long history of disappointing their fathers. My grandfather, a lawyer, was publisher of Oregon’s second largest newspaper. His son came to him and said he wanted to be a cobbler. That was kind of radical. You can imagine the disappointment on my grandfather’s face.”

Travis stressed that his father has been an inspiration to him despite their different pursuits: “One of the things that I’ve drawn from watching my father and speaking with him is that when you have this consuming passion for something, when you really believe in what you’re doing and give it your all—that’s how you know you’re on the right path.” 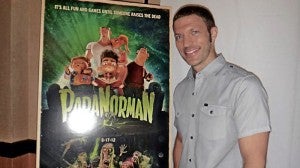 TRAVIS Knight, lead animator of “Coraline” and “ParaNorman” and CEO/president of his own animation studio, turns to his father, Nike co-founder Phil Knight, for business advice. Ruben Nepales

He did not understand his dad’s passion for sports at first (Phil Knight was a distance runner in college). “That was not in my DNA,” Travis said. “I did a lot of sports as a kid but I didn’t have that kind of passion. When I discovered art and filmmaking, I understood him.”

In any case, Travis admitted that it’s a “blessing” to be able to turn to his father, head of a multi-billion company, for business advice. “I can’t imagine a more experienced or wiser business adviser. From nothing, he built a company that became a massive worldwide success. It’s a great thing when I’m confronting a novel challenge … and I call him and say, ‘This is the situation I’m going through.’ He goes, ‘That reminds me of something that happened to me in 1986.’ It’s been incredible working with my father that way.”

We asked if he was wearing Nikes on this morning chat at the Hyatt Regency Century Plaza in LA. “I’m wearing Cole Haan,” he said with a grin, but clarified that Cole Haan is an affiliate brand of Nike. “That counts, doesn’t it? I think they’re selling it off.” He was referring to Nike’s recent announcement to sell two of its brands, Cole Haan and Umbro.

Travis played with dolls for about two years on “ParaNorman,” whose concept is described as “John Carpenter meets John Hughes.” The film about a kid who can see and speak with the dead is directed by Sam Fell and Chris Butler, with voices provided by Kodi Smit-McPhee, Anna Kendrick, Casey Affleck, John Goodman and Leslie Mann.

Due to limited space last Saturday’s issue, our column on Mamie Gummer,  Meryl Streep’s actress daughter who is carving a niche of her own, was shortened. We are running the omitted portions in response to enthusiastic feedback from readers who admire both Meryl and Mamie:

Landing her own TV series, “Emily Owens, M.D.,” is a hard-earned break for Mamie. It hasn’t been always easy for the eldest daughter of Meryl.

Mamie told us: “I remember going in for a role in ‘One Life to Live.’ The guy just laughed. He was like, ‘What are you doing here?’ But I was serious and I was like, ‘I’d like a job.’ I don’t know how much people know about me. When I walk into a room, I try not to concern myself with it because there’s nothing that I can do.”

Smiling, Mamie said her famous mom’s name always crops up in conversations. “There’s a lot of ‘How’s mom?’ But it’s fine; I’m really proud of her. She’s handled herself and her career so gracefully that people want to know how she’s doing.”

Mamie confessed that it was harder when she was younger. “That’s all anybody wanted to talk about. Now, gratefully, since I’ve been working, there’s more.”

Blessed with her mom’s patrician nose, Mamie has played younger versions of Meryl’s character in such films as “The House of the Spirits” and “Evening.” She thinks that’s great. “My mom’s gorgeous.”

Like Meryl, Mamie is down-to-earth and answers all questions thrown at her. She is sweet, with a simple and easygoing aura about her.

“Fiercely protective,” was how Mamie described Meryl as a parent. She was born in LA but, like her siblings Henry, Grace (also an actress) and Louisa, Mamie was raised in rural Salisbury, Connecticut.

Being Meryl’s daughter also posed challenges in school. “I was bullied a little bit in middle school,” Mamie admitted. “We moved around a lot so I was perpetually the new kid. People also knew who my mom was, so there was some level of needling or testing. Then I became a big champion, I would like to think, of sticking up for people.”

When we asked if she and Grace have experienced auditioning for the same role and one of them got it, Mamie replied: “We’ve traded a couple. She got something and I was like, ‘Fair enough, I’ll get you next time.’ Then I got something … it does balance out. It’s great to have your sister, who is also your best friend, go in for something and then call you to say, ‘Wear flat shoes and a skirt and do your hair like this. This is what they’re looking for.’ It’s more of a supportive relationship and not so competitive.”

After school (in Northwestern University), she made her off-Broadway debut. When she did a play called “Mr. Marmalade” with Michael C. Hall in New York in 2005, she realized, “This is happening, this is real. It was my first real gig in the real world and I loved it.”

“Sophie’s Choice” is Mamie’s earliest memory of being blown away by her mom’s performance: “I saw it at a film festival in Prague. I probably shouldn’t have; It was just gutting.”

Mamie met her husband, actor Benjamin Walker, when they costarred in the 2008 Broadway revival of “Les Liaisons Dangereuses.” They were married in her family’s Connecticut estate in July last year. “I always just assumed that I would get married and I’d have kids because my family has been of the utmost importance to me, and so it made sense,” she said.

Away from the cameras, Mamie serves as an ambassador for the Women’s Refugee Commission. “I have tried to remain active and aware of the world as best I can,” she said. “I give what I can when I can. I appreciate that women now outnumber men profoundly in colleges and universities. Women are rising up the professional ladder. That’s being reflected in our culture. There are many television series now with female leads, so it’s nice to see that.”