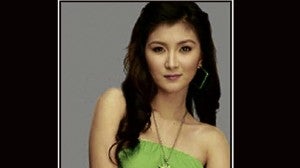 SHEENA Halili: All she could do was pray.

“You have to be prepared for any eventuality,” said actress Sheena Halili, who had the most traumatic experience on Tuesday when nonstop monsoon rains forced thousands out of their homes. Her family in Pampanga was not spared.

Sheena’s relatives in barangay San Nicolas in San Fernando, Pampanga, had to be rescued as floodwaters in the area reached roof level. Because she was in Quezon City, all she could do was pray.

“They were all told to move to higher ground that morning, but they ignored the warning. Meanwhile, rain didn’t stop pouring so by lunch time, all of them were on the roof,” Sheena told the Inquirer. “Also, I think part of a nearby dike was destroyed.”

The actress said nothing could compare to the terror she felt while waiting for updates from her father, who had gone to rescue her grandparents.

Sheena recounted: “I got a call from my brother in Pampanga at 12 noon. He said the water level at my grandparents’ house was so high, they had to bring their valuables to the rooftop. There are four families living with my grandparents. I was worried about my nephews and nieces, who were all less than 10 years old. I kept thinking that my grandparents, both in their 80s and very weak, could no longer swim. Plus, my Lolo is a diabetic. One of his legs is swollen.”

At 3 p.m., Sheena got a call from her father, who said he had secured a rubber boat and a truck, and was proceeding with the rescue. Her dad is a city councilor.

She continued: “Unfortunately, dad left his cell phone and could not be contacted during the rescue operation, which took almost five hours. I didn’t know what to think anymore. As I watched TV, all I could see was massive flooding. Kung anu-ano na ang na-imagine ko about my dad.”

At 3:47 p.m., she posted a call for rescue on her Twitter account. She also agreed to an interview on GMA 7’s “Flash Report.”

“At the same time,” Sheena said, “I had to pacify my loved ones while I myself was panicking. I received a call from an uncle whose wife and children were among those that needed rescuing. He said he was trapped at a gasoline station in San Nicolas. He begged me to do something for his family. I just told him to stay dry and not to worry because help was on its way.”

Sheena’s father completed the rescue between 7 and 8 p.m., the actress reported.

“From the rubber boat, my relatives were transferred to a truck and were left at the city hall with other evacuees,” she said. “They were eventually brought to our house, which was a few kilometers away. At 10 p.m., I spoke with my mom, who said they were all having dinner. It was only then that I felt relieved.”

Sheena offered this word of advice to people living in flood-prone areas: “You have to be ready to leave on short notice. Heed the advice of government leaders. Your lives are not worth risking for a few pesos worth of properties.”