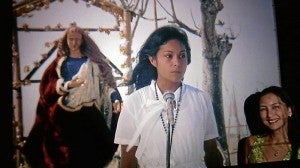 Two decades ago, it would have cost P15 million to restore an old movie; but with digital technology, the cost of saving our cinematic gems has become less prohibitive.

Leo Katigbak, head of ABS-CBN Film Archives, had always wanted to upgrade the network’s library, home to such classics as Peque Gallaga’s “Oro, Plata, Mata” and Ishmael Bernal’s “Himala.” He recalled, “It always boiled down to a question of costs.”

Then he met with Manet Dayrit, head of Central Digital Lab, who had taken up as a pet project the digital restoration of “Himala.”

“For years, we had been doing tests, figuring out ways to make the process less expensive, less time-consuming and less labor-intensive,” Dayrit related.

ABS-CBN and Central Digital Lab plan to digitize and restore some 3,000 titles in the network’s film vaults—beginning with “Himala,” starring Nora Aunor, which marks its 30th anniversary this year, said Katigbak.

To mark the occasion, the film’s restored and High-Definition version will have its world premiere at the Venice film fest this month. “We have big plans,” Katigbak said. “Since it’s now on HD and DCP (Digital Cinema Package) format, we can release ‘Himala’ theatrically, too.” Eventually, it can be shown on pay TV and cable, and released on DVD as part of something like a “Criterion Collection for local films,” Katigbak added.

Technicians worked on “Himala” for 700 hours.

The process started by scanning the 35mm prints frame by frame, Dayrit explained. “We scanned from two or three different prints, using the machine Cintel Millennium 2. Some prints had missing scenes. Some were damaged. We had to look for the best reels.”

Restoration experts also need to watch out for molds. Dayrit added, “Luckily, since ‘Himala’ was properly stored in the ABS-CBN Archives, we didn’t have a major mold problem.”

The colorists used the machine DaVinci Resolve, she said. “Colors fade over time. But we took extra care not to tamper with the filmmaker’s original intention.”

With Protools, audio engineers (Arnold Reodica and Ronald de Asis) worked on the sound— making sure to eradicate pops and whistles. “We also needed to sync some lines of dialogue,” Dayrit said.

After “Himala,” the team is working on “Oro, Plata, Mata” and will release it by year’s end, Katigbak said.

“Maalaala” is almost finished and will be unveiled in time for Star Cinema’s 20th anniversary celebration, Katigbak reported. They are also looking at some movies of the late Comedy King, Dolphy.

One film that can never be restored, sadly, is Celso Ad. Castillo’s “Burlesk Queen,” starring Vilma Santos. “The only remaining copy we have of ‘Burlesk Queen’ is on video,” said Katigbak. We can’t restore material that’s on video. We have to go back to the negatives or master print.”