Will Ferrell on Filipinos as backbone of US; Pinay at ‘Bourne’ preem in NY | Inquirer Entertainment

Will Ferrell on Filipinos as backbone of US; Pinay at ‘Bourne’ preem in NY 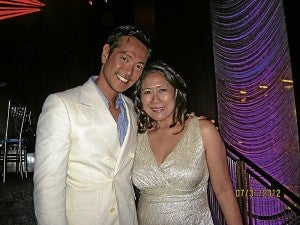 LOS ANGELES—Will Ferrell revealed in a recent interview how he came up with the expression “Salamat!” in one scene from “The Campaign,” his new comedy directed by Jay Roach: “I just asked one of the [Filipino] extras, ‘How do you say thank you?’”

That scene—in which Will’s character Cam Brady, a congressman campaigning for reelection, also tells Pinoy amusement park operators, “Filipino Tilt-a-Whirl operators are this nation’s backbone!”—is featured in the film’s trailer. The skeptical look on the Pinoys’ faces is priceless. That preview has gone viral on the Internet among amused Filipinos.

Will and costar Zach Galifianakis produced “The Campaign,” which has some really funny and raunchy moments, as it skewers politics and campaigning in present times. Dylan McDermott and Jason Sudeikis portray campaign managers who employ the dirtiest strategies known to man.

Will, in this chat at the Crosby Street Hotel in New York’s SoHo district, commented on his character, an incumbent who would do anything to win against surprise challenger Marty Huggins (Zach). “[That’s] so typical of a politician,” he remarked. “He will learn a few words in a [different] language, either ‘Hello’ or ‘Thank you for having me.’ And then do the rest in English. That was Cam’s attempt to reach the Filipino community.” 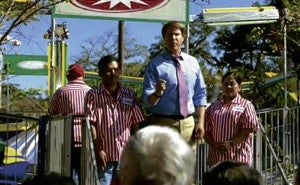 The actor credited screenwriters Chris Henchy (Brooke Shields’ husband) and Shawn Harwell for that scene. “That was originally in the script,” he said. “We had a couple of other similar ones. We had one that was cut in that opening. I think I was meeting with bankers and CEOs. We also had one about liquor and lottery ticket sellers. I made an appearance at a liquor store and then one before golfers and country club members. In each one, I said they are America’s backbone.”

Jay, who also directed “Meet the Parents,” “Meet the Fockers” and the “Austin Powers” movies, said it wasn’t easy finding Filipino extras for that scene. “The tricky part was that we were shooting in New Orleans where it was not easy to find a lot of Filipinos,” he explained. “So the casting director started eating at restaurants where they serve Filipino food. He would hand them his card. That was on one of our first shooting days.”

The director, who is married to The Bangles’ Susanna Hoffs, told us that he “always meant to ask” if there are indeed many Filipinos working as amusement park ride operators. When we said no, Jay smiled and quipped: “That’s what you get when you have crazy comedians in charge of a movie.” 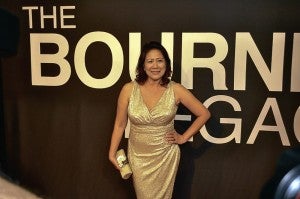 We can imagine the crazy improvisation that went on during the filming. Jay recounted an idea from an unlikely source: Dylan McDermott. He said, “Dylan had an idea that he would do one scene in full nudity, head to toe. Zach, after losing the support of the billionaires, would show up at Will’s house and try to convince him to do the right thing. He’s almost gotten through to him and then out of the shower steps Dylan with no clothes and just walks right up to Zach and stands right next to him. It was really funny and so shocking.”

Jay added, “Dylan is a very well-put-together man. He’s in good shape.” Grinning, he said, “My wife is still bugging me to let that footage be seen. That’s very disturbing to me. We have shots over the back of Dylan, all around. But it was provocative—it was just one, two, five steps too far. It was actually funny but the main reason we cut it was that it’s tied to a story and that got changed. We had to cut it for story reasons.”

Maybe put that footage in the film’s DVD version? “I don’t think I’m going to put it on the DVD, either,” Jay replied. “It’s going to have to go in a vault because I don’t know if I can exploit Dylan’s manhood.”

Thrilled Pinay Madeleine Nicolas, who plays the landlady in the Manila house where Jeremy Renner and Rachel Weisz’s characters in “The Bourne Legacy” temporarily stay, attended the film’s recent New York premiere at the Ziegfeld Theatre.

“I was thrilled when I saw my theater friends and colleagues in their respective scenes,” Madeleine wrote via e-mail about finally watching the film directed by Tony Gilroy. “First, it was John Arcilla, then came my two brief scenes … followed by Ruby Ruiz, Antonette Garcia and lastly, Lou Veloso. I was cheering for them very quietly. We all had lines.”

Madeleine was scheduled to go to the United States in late July through early August, so she knew she’d miss the “The Bourne Legacy’s” Manila premiere on Aug. 5. By coincidence, she’d be in New York on July 30, date of the action-thriller’s US premiere, so she asked Jun Juban, the Philippine line producer, if she could attend. Jun relayed Madeleine’s request to Pat Crowley, one of the coproducers, who immediately invited her.

“I was smiling and wide-eyed throughout the Philippine scenes and, by the end of the film, I was teary-eyed, Madeleine said. “There was this shot of Jeremy and Rachel that touched me. The shots of Palawan were so beautiful! I was happy and proud of the professionalism and amount of work the Filipino staff and actors put into the film.”

At the premiere party held at the Four Seasons restaurant, Madeleine congratulated and thanked Pat. “Mr. Crowley mentioned that he will be in Manila for the Aug. 5 premiere,” she

wrote. “I also approached Louis Ozawa Changchien who plays LARX #3 in the film. He is the villain who chases Jeremy and Rachel along the streets of Manila, Marikina and Navotas. We hugged like we were old friends and exchanged pleasantries. I remember that he introduced himself to me when we first met in Manila during the shooting.”

She continued: “Then I finally found Mr. Gilroy, surrounded by a lot of people. We shook hands, I congratulated and thanked him. He gave me a big hug.” Madeleine added that Rachel 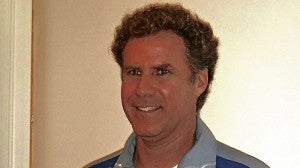 turned up at the NY event with her husband, Daniel Craig, and that she also saw Jeremy and Edward Norton, who is in the cast, too.