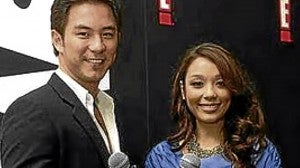 Chinese-British VJ-model Dominic Lau, host of “E! News Asia” (along with Marion Caunter), has done all sorts of interviews with Hollywood A-listers—from the awesome to the awkward.

He shares with Inquirer some survival tools he relies on when he’s on a press junket—where a seemingly endless stream of reporters queues up for a few minutes with jet-lagged celebrities.

“You’d be lucky to be the first or last person to interview a star. But if you’re in the middle, it would be tough,” he says. “Stars easily get tired of the same questions asked again and again.”

One such lackluster interview was with Nicole Kidman, Lau recounts. “I had interviewed her twice. She was fabulous the first time; that second time, not so much.”

When the interviewee is in a funk, Lau tries “to be as chill and candid as possible.” Which was what he did when he sat down with Kidman’s fellow Aussie and costar Hugh Jackman on the same junket. “He was great. We were just two blokes shooting the breeze.”

With his new job as “E!” anchor, Lau gets to gab with Asian stars more often.

He’s very familiar with Filipinos who have made it big in the international scene, like boxing champ Manny Pacquiao and singers Charice Pempengco and Arnel Pineda.

His interview with Pacman was memorable, Lau recalls. “We were instructed not to ask about Floyd Mayweather Jr.” Of course, he had to bring that up.

Lau, a huge rock fan, met Pineda when the Filipino was based in Hong Kong. “I used to frequent a bar called Edge, where Arnel and his band played,” Lau says. “That place was always full. Whenever Arnel did a Pearl Jam song, it sent shivers down my spine.”

When Lau learned that Pineda had been hired as front man for Journey, he was just as proud and excited as any Filipino fan. “I know that guy. I kept telling people that Arnel’s my friend,” says Lau, who was a drummer in his high school band.

On top of his list of dream interviews are E! host Ryan Seacrest and comedian Ricky Gervais.

He considers Gervais’ controversial Golden Globes hosting stint, in which he skewered some top stars, as “pure genius.”

He met Seacrest when he visited the E! office in Hollywood recently. “First thing Ryan told me was, ‘Jesus, you’re tall!’”

(Lau is 6’4”. His height, he says, comes in handy on the red carpet where can easily catch celebs’ attention.)

Like Seacrest in the United States, Lau hopes to produce original content for E! Asia-Pacific. “Asia is one big continent of different countries and cultures. The challenge would be to produce a show that’s relevant across the region.”

E! Entertainment Television can now be seen in the Philippines on Sky Cable. “E! News Asia” airs every Sunday.