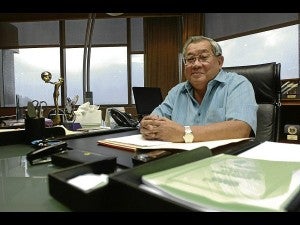 MANILA, Philippines—A criminal complaint filed against three of its executives in connection with an episode of the program “Imbestigador,” which aired on Jan. 29, 2011, has been dismissed, GMA Network Inc. has announced.

The respondents were accused of kidnapping, libel, physical injury, frustrated homicide, robbery, obstruction of justice, illegal arrest, abuse of authority, trespassing, fraud, perjury and estafa by complainant Daniel Orijuela, who was held in an entrapment operation at his office by the National Bureau of Investigation for alleged illegal medical practice.

The entrapment was subsequently aired on the GMA primetime investigative program.

The case stemmed from a complaint by Francisco Elmaga Sr., a patient diagnosed with stage 4 prostate cancer, who was offered treatment by Orijuela with the use of his “antibody treatment” machine in November 2010.

Orijuela promised the machine would stop pain and improve body condition, but did not guarantee a cure. Orijuela negotiated the two-month use of the treatment machine, inclusive of food supplements, for P100,000.

Francisco Elmaga Jr. admitted paying the reduced price of P50,000 so his father could avail himself of the machine, but the treatment was cut short when the younger Elmaga failed to pay the negotiated amount.

Gozon argued in his counter-affidavit that Imbestigador did not commit libel because what the program aired was a fair and true account of Orijuela’s conduct and activities, which were matters of public concern. He said Orijuela’s detention was a result of a valid and lawful arrest due to his illegal practice of medicine.

The program’s host Enriquez said he had justifiable motives and good intent in reading the report on Orijuela’s activities. He also said that what was aired were straight, fair and true reports of verified facts and that Orijuela himself did not contest the veracity of the segment.

Cabaluna said he did not deprive Orijuela of his liberty, nor did he defraud or inflict violence against his person. He reasoned out that there was no libel because the show conducted a thorough investigation of Orijuela’s activities prior to airing.

Cansino said there was insufficient evidence for libel because Orijuela failed to present a witness who had seen or heard the alleged defamatory statements made against his person. He said “the communication of libelous matter to the person defamed does not amount to publication, for that cannot injure his reputation.”

ADVERTISEMENT
Read Next
Poor Filipino makes it in ‘Bulaga’ Indonesia
EDITORS' PICK
Cherry Mobile teams up with Cloud Panda PH, launches online store
San Juan City to launch pop-up bike lanes
PH COVID-19 cases near 19K mark, as recoveries breach 4,000
Leveling up your ‘lutong bahay’ with the kitchen companion you never knew you needed
South Korea clamps down again as virus rebounds
PH walks back, suspends VFA termination ‘upon the President’s instruction’
MOST READ
PH walks back, suspends VFA termination ‘upon the President’s instruction’
Calida ‘just the lawyer, not the client’ and must ‘never lose his cool’ – Macalintal
Over 30 health workers felled or sickened by COVID-19 got no aid from ‘Bayanihan’ Act
7 members of nurse’s family in Laguna catch COVID-19
Don't miss out on the latest news and information.