Casiño was beaten up by four men at the parking lot of a bar in Makati City a few days after he finished doing the movie, “The Animals.” The movie is about a group of rich high school kids who get involved in exactly the same full-on bar brawl.

“The brawl happened a few days after wrap-up,” director Gino Santos told the Inquirer. “There are scenes in the film that resemble that incident.”

Santos added: “It just goes to show that these things do happen and, for that matter, can happen to anyone.”

Casiño’s mother Rina identified the four men who ganged up on her son as friends of Casiño’s ex-girlfriend, actress Andi Eigenmann. The actress denied this.

“The Animals,” an entry in the New Breed category of the ongoing 8th Cinemalaya Philippine Independent Film Festival, is set in an affluent, upper middle class village.

It chronicles a day in the life of Jake (played by Casiño), Trina (Dawn Balagot), and Alex (Patrick Sugui), who go through situations that every kid in high school find themselves in.

“All Jake wants to do is have a good time, Alex just wants to fit in, and

“A very vivid picture is painted of life in high school after the final bell rings, as well as a different side of the Philippines, and what is happening to its privileged children.” 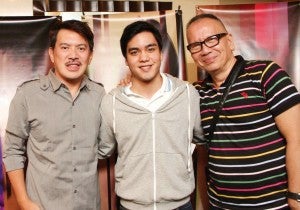 He said he had the story in mind five years ago. “I organized parties when I was in high school; that was when the concept began. When I finally decided to write the full script with my childhood friend Jeff Stelton, we used real events and experiences to create the story line,” Santos said, adding that he and Stelton went to clubs during weekends “to observe intoxicated teens.”

Looking for the perfect actress to play the character Trina was tough, Santos shared. “Since the role isn’t your Sunday-afternoon-teleserye type, she had to be young, beautiful and sosyal. (She also) had to do daring scenes. In the end we got model Dawn for the role. She was amazing in this film. She will get noticed.”

Santos said shooting schedules proved to be the biggest hurdle in making the movie. “We had a few problems with time, since 60 percent of the scenes were at night. [We worked] in the height of summer, when the sun would set late and rise very early. We only had 10-12 hours of shooting.”

He continued: “We originally planned to finish shooting in five days, but we needed an extra day, which was painful to me, being the director/producer.”

In terms of script development, Santos said, “Another very big hurdle was the fact that Jeff and I were juggling the script with our thesis. Jeff’s thesis was actually due the same day as Cinemalaya’s deadline for the final script.”

He added: “I just really prayed for strength. [It was good that] my team really believed in me and their support helped me have more faith in myself.”

Santos advised young filmmakers like himself: “Trust your team. Film is a collaborative work and no filmmaker is an island. It’s not easy to make a full-length (feature), that’s for sure!”

However, he vowed to do more films “and explore the industry—indie, mainstream, commercials, TV, everything—while I’m still young. There’s a lot of learning needed still on what I want to do with my life, but this is definitely my field.”

Santos graduated from the De La Salle University-College of St. Benilde (DLSU-CSB) with a degree in digital filmmaking.

In 2006, he went to the Asia Pacific Film Institute, which sparked his passion for filmmaking. To enhance what he learned, he enrolled in the Marilou Diaz-Abaya Film Institute the following year. In August 2012, he participated in a workshop conducted by the New York Film Academy in Kyoto, Japan.

Santos was chosen to represent the country in the Motion Picture Association–China International Copyright Expo workshop held in Beijing, China in December 2011.

His short musical film, “Ang Tangke,” was chosen to represent DLSU-CSB in the MGDF1919 water stories competition with 10 other local schools. The musical received an honorable mention in the 22nd Gawad CCP. It competed in the 19th Contravision Film Festival in Berlin.

Santos again received an honorable mention from the 23rd Gawad CCP in the experimental category for his short film “Bangungot.” His short feature “Every Other Time” was an official entry in the 2011 Cinemalaya.