A miracle for ‘Himala’ 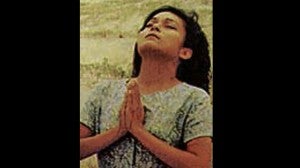 Ishmael Bernal’s “Himala” has been digitally restored. “We just finished the process,” said Manet Dayrit, who worked on the project spearheaded by ABS-CBN, which now holds the rights to the 1982 film. “We digitized the film and removed scratches, dirt and other damages.” Topbilled by Nora Aunor, “Himala” was voted best Asia-Pacific film of all time in an online poll conducted by CNN in 2008. Bayani San Diego Jr.