Way of the drums 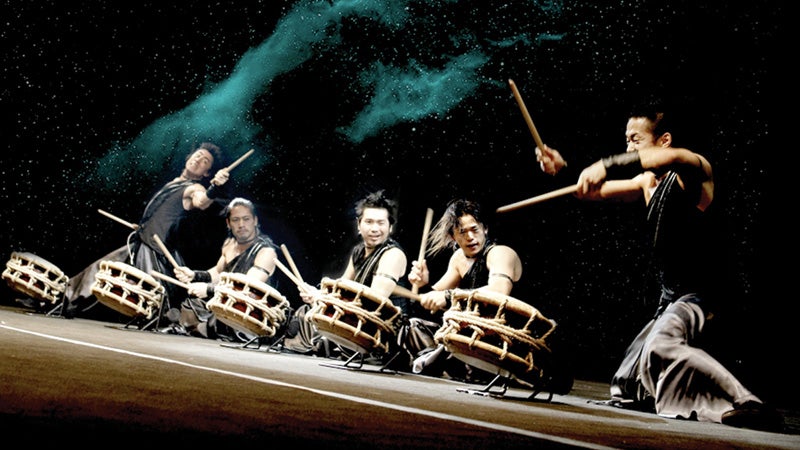 Even with the players seated, the energy of their performance is irrepressible.

Rhythm and rage need not be strange bedfellows, not when tied together with aggressive dance and visual poetry.

If this sounds like a trap of contradictions, two hours with the world-renowned Drum Tao performers from Japan will help make sense of it and, out of every hard-to-please Pinoy, an unequivocal fan.

They’re in Manila, shaking audiences at Resorts World’s Newport Theater out of their seats and traditional notions of “show.” Watch reticent Pinoys laugh, clap, shriek and stomp their feet on the third number. It can be disorienting.

This is how drums made people pay attention before sound-amplifying equipment were made: with raw muscle power and an ear held close to a pounding heart.

Serious taiko drums, big and small (transported with utmost care, for sure); sticks none like the usual, some as big as the drummers’ arms and requiring full-torso exertion—what a sight, whether it’s a male or female form on center stage or against a red moon.

Five million spectators around the world have come to events showcasing Drum Tao, a world-renowned martial arts and drum-playing troupe.

A British newspaper described the troupe as “supernaturally fit and superbly trained.” We are stuck at “supernaturally fit.” Indeed, two or three of the male drummers would wear the title “shaman” well, but every drummer/dancer’s move is tantalizing, at times hypnotic.

Thus, each comic interlude serves as a respite from the intensity that few notice building up until the famously cold Newport Theater becomes just a little warm.

Aside from the drums, the troupe also plays flutes, tokos, trumpets and, of course the three-string shamisen—though the players treated it like a rock guitar, like Yoshida Brothers famously did. 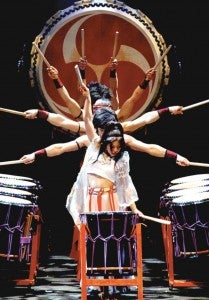 Whether they’re jumping around, karate-prancing or seated; with every grunt, wail and groan, it’s clear where the Drum Tao stars pull out the infectious energy from. Not from the six-packs or strong long lady legs, though there is an abundance of that for eye-candy (power in very attractive packages). It’s from the “supernaturally fit” component, emphasis on the first word. These performers are proud of, and passionate about, what they do—and spectators cannot not be touched.

If this is how they prep warriors for battle, the sentiment is not lost on the audience. However, although a sense of foreboding hangs in the air at times, at other times, a sense of fun takes over. The players emerge from seats in the hall and trade jokes with the audience, wordlessly. At least not in English.

And then they resume performing, at times like shrapnel from a single grenade, each one potent; but most often like a dynamic single unit, inescapable and dangerous. From where the spectator sits, it looks like their very breaths and pulses are synchronized.