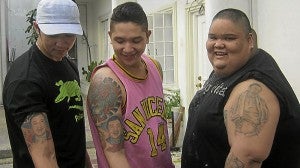 MANILA, Philippines—Three grandsons of the late comedy king Dolphy are paying him a lifelong tribute by having his image tattooed on their arms.

Rowell, Nico and John Quizon, whose father Freddie is the comedian’s son with Gracita Dominguez, are bearing the portrait to go with their countless stories about life with their lolo, who passed away on July 10.

In an interview with this writer, they all expressed deep sorrow over their grandpa’s passing just days before his 84th birthday on July 25.

“The National Artist award should have been given to him a long time ago,” said Rowell, a singer who reached the semifinals of ABS-CBN’s “Pilipinas Got Talent” competition.

Rowell recalled that on Dolphy’s last few days at Makati Medical Center, he gave his old man a rosary that had been blessed in Rome as a birthday present in advance.

“He never failed to pray the rosary regularly,” said Rowell, who often visited Dolphy at his house in Marina Subdivision, Parañaque City, where he treated him to his favorite delicacy, biko (sweet sticky rice).

Dolphy also frequently attended Mass on Wednesdays at Redemptorist Church in Baclaran even when he was sick, he added.

“When I was a child, I visited him in his taping (sessions) for ‘John en Marsha.’ He would still find time to play with me. I also became an extra in that show,” Rowell said. “As I grew up, he always reminded me to avoid getting into trouble, to study hard and to be friendly with the poor.”

To Nicollo Paulo, aka Nico Quizon and a former child star, Dolphy was a loving and thoughtful grandfather who remembered “all our names, birthdays and even the sizes of our shoes, pants and shirts.”

Dolphy also often visited his old house in Tondo, Manila, his birthplace, where he could still vividly remember many landmarks such as old trees. “At alam niya ang mga tarantado sa aming lugar (He still knew who were the usual trouble-makers),” he said.

Like Nico, John also marvelled at Dolphy’s sharp memory and the personal attention he lavished on each of his grandchildren.

“Whenever he ordered food (in a restaurant) for our big group, for example, he would call you by name and make sure you sample every dish. It’s a simple thing, but that’s how he showed his love for his family,” he said.

At home, Dolphy enjoyed playing the card game tong-its while being massaged by his grandchildren. Later in the day he would go to his room for a nap, John said, and then return bearing gifts like shoes, pants and shirts.

“As a grandfather, he knew his responsibility,” he said.