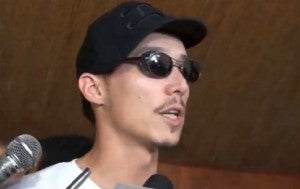 He was “very calm and he looked contented,” Quizon said.

Speaking to reporters at the Heritage Park in Taguig City on the second day of Dolphy’s wake, Epi said his father “left the world very calm,” contrary to their fear of seeing Dolphy in agony in the last moments of his life.

He said they cried every time they saw Dolphy in pain while undergoing dialysis and blood transfusions.

Before Dolphy’s passing, Epi said they didn’t show their father that they were crying. But if it can’t be helped, they turn around just so Dolphy wouldn’t see.

As for Dolphy’s other son, Vandolph, holding back his tears was “difficult.”

Vandolph said it was hard for him because he would just break down in tears every time he faced his dad.

“Tumatalikod ako agad kaya di ko na nasasabi gusto kong sabihin,” Vandolph said, adding that when he tried to speak, his words were all unclear as all that can be heard was his sobbing.
Burial
While the Quizon family is grateful to all the prayers and support of Dolphy’s fans, Epi said the burial, tentatively scheduled on Sunday, is likely to be made exclusive to them and to close friends only.

“Probably it will be televised but as much as possible, we want it solemn kasi ang laki ng pamilya namin ngayon,” he said.

Epi said it took him 30 to 40 minutes just to tell his family and other visitors to settle down in preparation for the arrival of President Benigno Aquino who stayed for just about 15 minutes.

The family, he said, is contemplating on preparing a guest list for Sunday.

Meanwhile, public viewing will resume Friday from 8 a.m. to 3 p.m.

Among the visitors who arrived at the wake were Gloria Romero, Maricel Soriano, Dennis Padilla, German Moreno, Regine Velasquez and Ogie Alcasid.

Romero told reporters that people loved him for being a “gentleman.”

“You’ll never hear him bragging about his accomplishments,” she said.