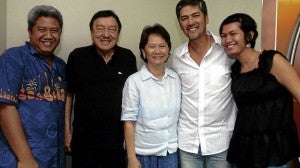 In the last four years of his life, King of Comedy Dolphy granted the Inquirer Entertainment staff at least three sit-down interviews.

In 2008, he would’ve gladly visited the PDI office in Makati—but he learned there were no lifts.

We gladly trooped to Shangri-La Makati instead, and had a rendezvous with Dolphy and another top  comic, Vic Sotto.

Though the afternoon conversation was set before the opening of their movie “Dobol Trobol,” no topic was off-limits for the duo—not even their colorful love lives.

Dolphy said he saw himself in Vic, particularly in the way the younger comic “loved” the women in his life.

Facing Vic squarely, Dolphy said: “You will go through a lot more. But there will come a time when you will settle down like I did.”

They agreed on the most painful part of any relationship: Saying goodbye. 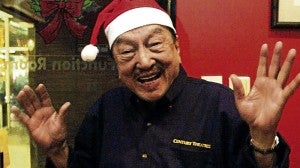 A SANTA for all seasons INQUIRER PHOTO

“Especially if there are kids involved,” Vic added.

In mid-2009, Dolphy welcomed us to his home and treated the entire team to an afternoon of nostalgia and merienda.

This time, he had beside him Zsa Zsa Padilla, his partner for over two decades.

Together, they were like a comedy tag team. Even in Zsa Zsa, Dolphy found a perfect comic foil. They completed each other’s sentences, tried to beat each other to the punch lines, as if by telepathy.

He explained why he had become a home body and couch potato: “I ended up with 18 kids because I used to enjoy going to nightclubs.”

Zsa Zsa’s poker-faced retort: “I’m pretty low-maintenance myself. He has only two kids with me.”

She joked that Dolphy called her incessant dieting, “The Holocaust regimen.”

“He also says I am a cheap date because I order only tuna sandwich when we go out,” Zsa Zsa related.

Right before Christmas 2009, Pidol met up with the Inquirer again—this time, he was accompanied by son Eric Quizon, who directed his film “Nobody, Nobody but Juan.” The venue was the comedian’s favorite mall, Rockwell. 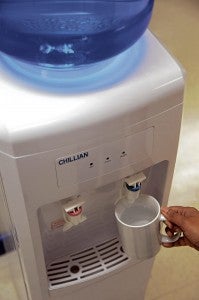 THANK you, Pidol, for keeping us cool. Or warm, as the need arises.JOHANN GUASCH

It was the Yuletide season and to see Dolphy having a regular day at the mall was quite an experience.

Every holiday shopper who glimpsed our little group couldn’t help doing a double take. Faces lit up all around us.

Although usually low-key in public, Dolphy had a ready smile for anyone. He gamely donned a Santa Claus cap when we asked to take some snapshots.

A year later, he became the Secret Santa of our corner of the office, when he gifted the staff with a water cooler.

To this day,  not everyone in Inquirer knows that the water dispenser is a gift from the great Pidol.

So now we thank him, and think of him every time we get a drink. Cool.