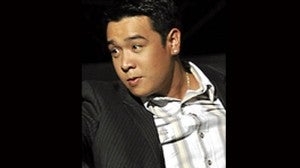 Vandolph Quizon, Dolphy’s son with actress Alma Moreno, does not mince words about his dad.

The heir-apparent to the King of Philippine comedy said:

“Almost all the good qualities of one person are in my dad. I respect him so much. I want to be like him … He was my model. He was everything (to me).”

He added in Filipino: “I saw how well he treated people. I saw how helpful he was. He was so loving to his family. My father was really a kind person. I love him so much.”

Vandolph, at age four, appeared in the film “Bata-Batuta,” then later in the ABS-CBN sitcom “Home Along Da Riles.” He was also in the action series “Pintados” on GMA-7 in 2000 and “Palos” on ABS-CBN in 2008. He launched his first gag show “Quizon Avenue” on ABS-CBN in 2006. In 2009, he joined his dad in the family fantasy sitcom “Pidol’s Wonderland” on TV5.

On weekends, he used to play basketball with his cousins and nephews in front of their house on Bohol Street, Marina Subdivision in  Parañaque City.

He said he could still play basketball and didn’t lose his appetite even if he was sick.

When he met a car accident in 2003, which almost claimed his life,  he said Dolphy was such a supportive father. Dolphy was always there in the hospital, seeing to it that Vandolph was safe and alright.

With his father’s death, Vandolph’s world was devastated for he lost “a very good father, my best friend and confidante.”

He realized, however, that he ought “to accept God’s will and the harsh realities of life.”