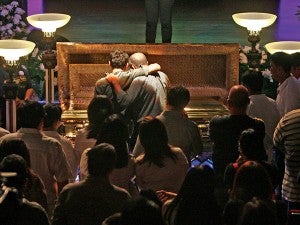 KING’S TRIBUTE Members of Dolphy’s family view his body during a tribute to him at ABS-CBN’s Dolphy Theater on Wednesday. RAFFY LERMA

In the end, as his colleagues would say, Dolphy left his audience with a smile on their faces.

In death, as was in life, the Comedy King moved his countrymen to tears tinged with joy and sadness, gratitude and hope.

During Dolphy’s one-month confinement at Makati Medical Center, the media had been swamped with various messages of love and support from his colleagues who bravely crossed network lines for the screen legend.

Upon his passing on Tuesday night, more messages of condolences and appreciation for the iconic comedian poured in from all sectors of the entertainment industry.

Briccio Santos, chairman of the Film Development Council of the Philippines, said: “A great loss. Many of us grew up with Dolphy in our midst, so he will always be a part of us and will always be remembered for all the laughter he gave us.”

Mary Grace Poe-Llamanzares, chairperson of the Movie and Television Review and Classification Board, said: “He is mourned not just by members of the entertainment industry but by millions of Filipinos who grew up watching his movies and TV shows. Dolphy was a genuine and sincere person. An intelligent and creative actor. A storyteller who retold the story of the Filipino with humor and hope. He was a loyal friend, a generous person and a true patriot.”

Regal Films producer Lily Monteverde recalled that she produced at least four movies for Dolphy: “Darna Kuno” (1979), “Da Best in Da West” (1981), “Daddy’s Little Darlings” (1984) and “Once Upon a Time” (1987). Monteverde looked back: “It was not all business with him. He treated me not just as a producer but as a family friend. He, together with his family and my family, even traveled together to Hong Kong. He loved traveling. He always sent over food during my birthday. He was a good man.”

Manny V. Pangilinan, chairman of TV5 (the network Dolphy was under contract with at the time of his passing), told the Philippine Daily Inquirer in a previous interview: “People’s laughter and applause were his medicine. [His partner] Zsa Zsa [Padilla] told us about a time when he got sick during a concert abroad. He had diarrhea, was dehydrated and was very weak. But the minute he stepped onstage, he was revitalized and performed like a pro.”

Felipe L. Gozon, chair of GMA 7, told the Inquirer: “His passing was a great loss to the entertainment industry. He will be sorely missed. I only have fond memories of him—of ‘John en Marsha’ and later ‘Home Along Da Riles’ and his countless movies that gave laughter and joy to millions. He was the undisputed king of comedy in the Philippines.”

Charo Santos-Concio, ABS-CBN president and chief operating officer, gave credit to Dolphy for paving the way for her in the industry: “I had my start as a production assistant on ‘John en Marsha’ in the 1970s. When a guest didn’t show up, I got my first acting job on ‘John en Marsha’ as well. Later, he was the star of my last movie before getting married, ‘My Juan en Only,’ in 1982.”

Bobby Barreiro, TV5 executive vice president and chief operating officer, recalled a favorite story Mang Dolphy loved sharing on the set. “He would often visit the homes of friends during town fiestas in the provinces.  He would eat and dance at the party—only to discover much later that he was in the wrong house. The same thing happened at wakes. He would be welcomed by the bereaved, but he would later find out that he was in the wrong house. He said he’d be too embarrassed to take back the flowers he had already given earlier.”

These anecdotes, Barreiro said, prove that Dolphy was welcome in every Filipino home.

Ray Espinosa, TV5 president and chief executive officer, said he grew up watching the TV show “Buhay Artista” in the 1960s because his father was a Dolphy fan, too.

Perci Intalan, TV5’s head of Entertainment, recalled bumping into Dolphy at the Redemptorist Church in Baclaran. “He would usually go there on Tuesday night. One time, he was about to leave when a bunch of street children mobbed him, to ask for alms. Perhaps he got shy because I was there, so when he gave money to the kids, he made it a point to do it discreetly. He didn’t want to show off.”

Batangas Governor Vilma Santos, who’s now identified with ABS-CBN, told the Inquirer: “The whole country is saddened by the news. He was simple but someone with a big heart for Filipinos. He entertained us for over 60 years.”

The actress-politician recalled that she first shared the screen with Dolphy when she was a child star. “I worked with him and the late comedians Panchito and Chichay when I was 11 years old in the Sampaguita movie ‘King and Queen for a Day.’ That was 1963.”

Singer-actress Sharon Cuneta, who’s also a TV5 talent like the comedian, said the news stunned her: “I still cannot grasp it. I’m in shock. All I know is that I want to be as loved as he is. I want to be like him. There are too few left in the world—and especially in show biz now—who can even come close to the kind of person he was. I love him and always will. I miss him so much already. I am sad that my career will never be complete because I was never given the chance to work with him. I hope that he and my dad (the late Pasay Mayor Pablo Cuneta) are laughing together up there.”

Another GMA 7 star, singer Ogie Alcasid, president of the Organisasyon ng Pilipinong Mangaawit, remarked: “Dolphy is a national treasure. He will be missed but he will be remembered always and for all time. He was a ninong (principal sponsor) in my first wedding (to former Miss Australia Michelle van Eimeren) and he traveled all the way to Taal, Batangas, just to attend the ceremony.”

Alcasid said he only had the chance to work with Dolphy just once. “I guested in an RPN 9 TV special in the early 1990s. I was starstruck, but he was very humble, quiet and unassuming, and very appreciative of everyone on the set.”

Read Next
Alipin, July 12, 2012
EDITORS' PICK
‘I believe’: Hidilyn Diaz bucks the odds to win historic Olympic gold
Filipinos celebrate PH’s first gold medalist Hidilyn Diaz
Connect to PH’s fastest network with new Signature Plan Lite at only P599 per month
Hidilyn Diaz wins weightlifting gold in Tokyo Olympics
Harnessing technology for quality education
Tips for a cheerful life
MOST READ
Hidilyn Diaz wins weightlifting gold in Tokyo Olympics
Go to war with China over West PH Sea? It will be a ‘massacre’, says Duterte
FLASHBACK: The day Hidilyn was shocked over inclusion in oust-Duterte matrix
Hidilyn shoots not only for gold but also for permanent place in PH sports history
Don't miss out on the latest news and information.