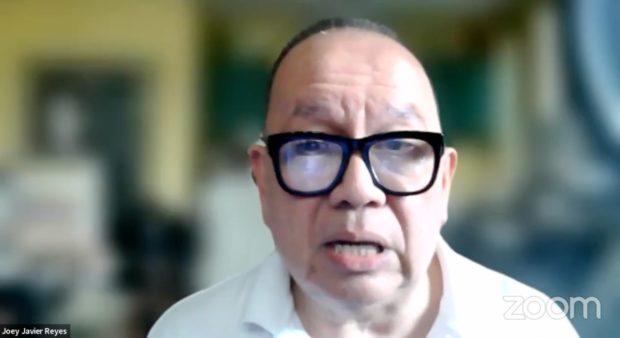 MANILA, Philippines — The Philippine film industry is in a “dismal” state, as director Jose Javier Reyes put it, because a theater exhibition of movies offers producers only a low return on investment.

So producers have been shifting to providing content for online streaming, Reyes said on Tuesday at the hearing of the House Special Committee on Creative Industry and Performing Arts.

He had been asked by Rep. Marissa Magsino of the OFW Partylist about the state of local film production.

“Dismal, as I said, dismal.  If I gave you the numbers of how much was the total gross on the opening day of the two movies that opened last Wednesday, the numbers are unspeakable,” Reyes said. “And therefore, the results are very discouraging if we will depend on the cinemas as the source of the ROI of the producers.”

Reyes, who is also a consultant for the Film Development Council of the Philippines (FDCP), added: “How many producers are very active? Well, Viva is extremely active — but basically because of their major platform, because they have their own platform. If ever there are producers who are active, they’re no longer to service just the local industry alone, but to provide content for various platforms like Amazon Prime and Netflix.”

How many active producers?

Reyes said audiences and policymakers must not look at the Metro Manila Film Festival (MIFF) as an indication of the state of the industry.

“So the movies for Filipinos who are regular cinemagoers are rare because, to be honest, it is a losing proposition. Of course, the MMFF last December yielded a handsome result, right? Like ‘Deleter’ earned so much. But we must remember that this is due to the Christmas season. People have money, and people have celebrated Christmas by going to the movies,” he said in Filipino.

“But Christmas doesn’t happen for 12 months a year. So that is not sustainable,” he added.

According to actor Tirso Cruz III, who chairs the FDCP, there are 67 producers in the country, citing a figure given by the Movie and Television Review and Classification Board. But he said it was not clear how many of them actively making movies.

“As of now, we can see and feel the effects of the shortage in films produced due to the fact that it is a big risk for a producer to release money,” Reyes said at the hearing. “Also, several industries are affected — not only the film industry but also ancillary industries like catering, service rental. It drives you crazy.”

In a previous hearing of the committee, Reyes advised local players to focus on helping the film industry survive first before aspiring for the Oscars.

Reyes said they were looking towards teaching people the economic side of making movies, like guiding producers how to properly manage their finances.

He also said that they want to revive the film fund, where lawmakers pitch a specific amount that would act as a seed fund for film production.

In response, Pangasinan Rep. Christopher De Venecia, the committee chair, that they hope to discuss these things more so that they could propose an allocation for these items, especially with the Department of Budget and Management (DBM) doing a budget call.

“Since there’s a budget call already by the DBM that will happen in the next few months, maybe we can assist you on that if we need additional funding for that,” De Venecia said.

Your subscription could not be saved. Please try again.
Your subscription has been successful.
Read Next
No room for complacency in Boy Abunda’s TV comeback
EDITORS' PICK
Philippine-United States alliance ‘rock solid’ — DFA
Makabayan bloc blasts bid to expand US access to more military bases in PH
House energy committee chair Arroyo bats for cheap electricity
Omega Speedmaster super racing: Tiny device massive change
vivo Philippines offers a free bouquet of flowers and a premium necklace perfect for Valentine’s Day
Fuel price rollback expected on Feb 7
MOST READ
Vice Ganda gets called out for ‘unfair treatment’ of ‘It’s Showtime’ co-host Karylle
Fuel price rollback expected on Feb 7
Kris Aquino gets ‘renewed confidence’ after consultation with new doctor: ‘I have a strong chance of getting better’
Pokwang tells self amid revelations on past relationship: ‘Bangon, nanay ka’
Follow @GabrielLaluINQ on Twitter
Don't miss out on the latest news and information.