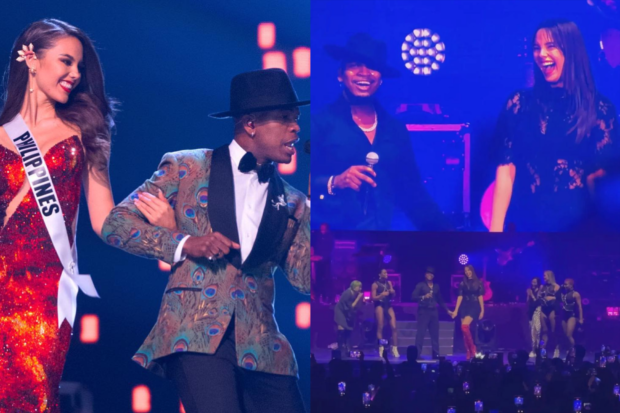 Catriona Gray got to recreate her signature Miss Universe “lava walk” when she reunited with American R&B singer Ne-Yo during the Manila leg of his concert on Monday, January 23.

Gray first met the award-winning crooner in Thailand during the Miss Universe 2018 pageant, in which she was wearing her iconic red “lava gown” created by designer Mak Tumang as she held onto Ne-Yo’s arm as he was singing “Miss Independent”. She eventually won the Miss Universe crown that night. 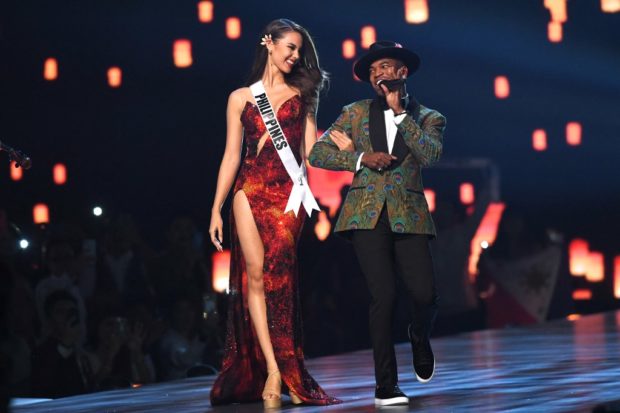 Catriona Gray (L) of the Philippines looks on while US artist Ne-Yo performs on stage during the 2018 Miss Universe Pageant in Bangkok on December 17, 2018. (Photo by Lillian SUWANRUMPHA / AFP)

But on Monday night, it was a dream-come-true for Gray to dance with Ne-Yo.

“Hey, what’s your name,” Ne-Yo said, who appeared not to have recognized her at first..

“My name is Catriona. I actually walked with you in Thailand, I’m Miss Universe,” Gray said.

“I remember you,” Ne-Yo replied, as he gave Catriona a hug.

The three-time Grammy winner then continued to perform, as Gray recreated her signature lava walk in front of the audience.

The Miss Universe 2018 titleholder gushed about her fangirl moment on her personal Twitter page on Tuesday, Jan. 24.

“Huhu got [to share] the stage with @NeYoCompound twice (whaaat) huhu my fangirl heart is so happy,” she said.

Huhu got to the share the stage with @NeYoCompound twice (whaaat) huhu my fangirl heart is so happy 🥹🥹🥹 https://t.co/jW47btQIFL

Gray also revealed on Instagram that it was one of the concert’s stage managers who chose her to share a moment with Ne-Yo onstage.

“So last night, Neyo asked for members from the audience to dance, syempre hindi ako (of course, I’m not a) dancer! But then everyone around me was pointing to me and, taking notice, one of the stage managers picked me to take me to the stage. Kinabahan ako tulooooy (I was so nervous). Pero ang alam ko (But I know) I can’t dance but I know how to WUAALLKKKK,” she said.

Hours before Ne-Yo’s show, the beauty queen also expressed her excitement over seeing the R&B hitmaker in the flesh on her Instagram page.

The beauty queen has always been vocal about her love for Ne-Yo on multiple occasions, including a moment where she talked about doing a “lava walk part 2” in October 2022. She also reminisced about the Miss Universe 2018 final walk portion in a 2019 post, saying it was the “favorite moment” of her journey.

Gray also shared in a Miss Universe throwback video that she’s “super in love” with Ne-Yo’s music and described “Miss Independent” as the “soundtrack of my life.”

Ne-Yo, who bagged three Grammy Awards during his career, is best known for his hit songs “Miss Independent,” “Mad,” “Together,” “Beautiful Monster,” and “Never Knew I Needed,” among many others. EDV