Maureen Wroblewitz admits ‘messy’ split with JK Labajo: I sacrificed my beliefs, values in past relationship 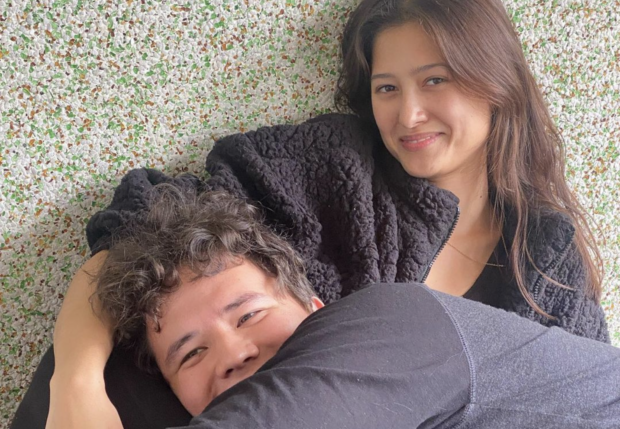 Maureen Wroblewitz is speaking up more about her previous relationship with JK Labajo, confessing that their breakup was “quite messy.”

The model-beauty queen earlier revealed through a TikTok video that she “lost” herself in her past relationship and that she was still “healing from trauma.” This revelation piqued the curiosity of netizens who then urged Wroblewitz to open up more on her past with the actor-singer.

“I’m here to say that there is no tea to spill,” Wroblewitz said via a video on her TikTok page last Sunday, Jan. 22. “I don’t think that’s fair because I cannot just blame one person. The point of my video wasn’t to throw shade but it was focusing on all the things that I have learned from my relationship.”

“In my past, I have sacrificed my beliefs and my values, and I did things that I didn’t like. I enabled behaviors that I didn’t like,” she continued. “I became someone who I dislike, and that was because I was so focused on pleasing my partner that I forgot about myself.”

Wroblewitz reiterated that she is not putting all the blame on Labajo regarding their failed relationship and that in fact she learned so much from it even if it “wasn’t the healthiest relationship.”

“We were both very young when we got into the relationship and I don’t regret those years,” she stated. “It’s sad that it didn’t work out but it was for the best. The past eight months haven’t been easy and until today I still cry over past trauma but I am healing everyday and I’m working on myself.”

Wroblewitz then made clarifications about their previous relationship in response to some netizens including one @moonlightlotto, who stated that the former couple “broke up on good terms.”

“It was quite messy like most break ups but now all we want is for the other person to be happy,” she said.

The model-beauty queen also said that she is “still not ready to be in a relationship,” after a certain @jesserasuarez asked how Wroblewitz would be able to completely heal from her trauma when she “jumped easily to a new relationship.” The netizen was apparently pertaining to Wroblewitz’s confirmation last December that she “already has someone.”

“I believe we don’t have to be healed 100% before getting into a new relationship but it’s definitely not a good idea to jump into a new relationship when you’re far from healed,” she wrote. “I’m maybe at 60% and I’m still not ready to be in a relationship. It will really depend on you and if your partner has been helping you heal, if you see progress I don’t think it’s important to say who moved on first.”

Wroblewitz did not categorically say whether she is currently dating or not, but she noted that she is now focusing on self-love and healing before she takes “the next step.” She also added that she respects her “ex” and his new relationship, without stating who she was referring to.

“I’m learning to enjoy my own company, being independent and loving and choosing myself first people come and go,” she continued. “At the end of the day, it’s ourselves we can really rely on. I’d like to do that before I get into another relationship. And I’m picky now since I know my worth.” 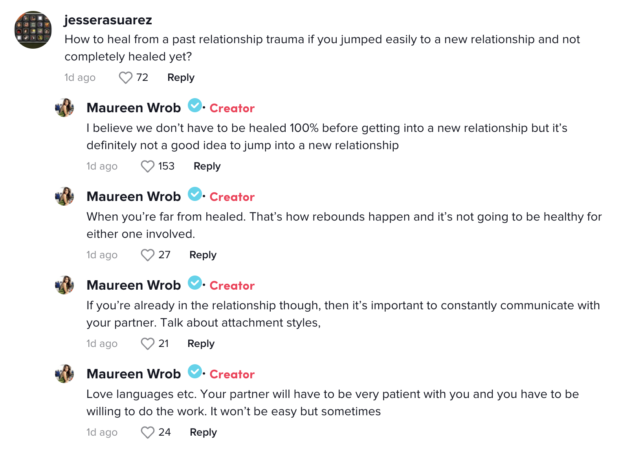 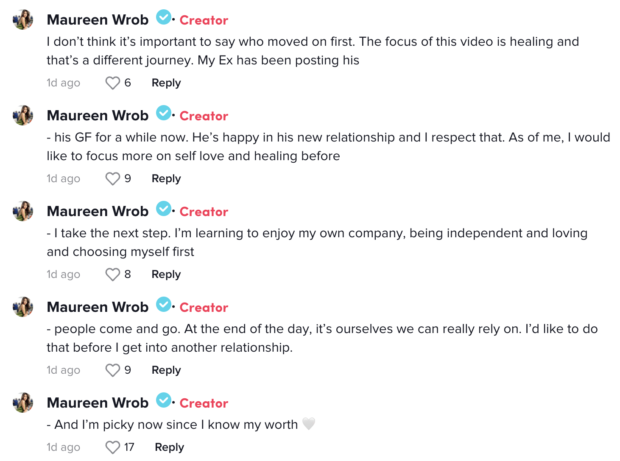 Wroblewitz and Labajo announced their breakup in June last year, with the singer saying at the time that they were both “so young” and that they “have to enjoy themselves.” Wroblewitz was then spotted with a mystery man in Siargao in November, then confirmed a month after that she “already has someone.” It was not immediately known if the model was referring to the same guy she was seen with.  /ra

Maureen Wroblewitz ‘lost’ self in past relationship: ‘I wasn’t loved the way I wanted to be loved’

Maureen Wroblewitz confirms she ‘already has someone’