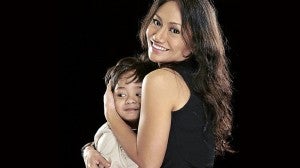 She showed up exhausted, because she had just wrapped up work on the musical play “Noli” (where she portrayed Sisa). Her mind wasn’t totally on the screen test, but as she was singing “Twinkle, Twinkle Little Star,” she felt a single teardrop running down her cheek.

“The director got worried and asked if I were okay,” she recounted. “I explained that I was just tired.”

As luck would have it, she soon received an e-mail informing her of the good news: She had bagged the plum role of a Filipino nanny in the international film, “Iloilo.”

Chen, whose short films have competed in Berlin and Cannes, told Bayani that he was inspired by his own childhood in making his feature film debut.

“It’s his tribute to the Filipino nanny who raised him,” she said. “It’s about the conflict between two cultures… how Singaporeans are coming to terms with the idea that their children are being cared for by Filipinos.”

It was a much-coveted role among the current crop of local indie actresses. “On Facebook, my friends, who also tried out for the same part, congratulated me,” she recalled.X

Then it hit her: These colleagues are not only award-winning; they are among the most talented in her batch as well.

“I felt so lucky,” she said. “Instead of focusing on its significance, career-wise, I thought of my child. It came at the right time… because my 4-year-old son Marek has started going to school.”

Previously, she appeared in French (Joel Farges’ “Slaves of the Sea”) and US productions (Ron Morales’ “Graceland”). This latest international project, however, is a much-delayed reward for Bayani who has been slaving away onscreen and onstage for years.

She played a deranged mother (“Noli”), a gay countess (“Lulu”) and a fag hag (“Care Divas”) in plays; and a mermaid (“Kalayaan”), hired killer (“Detektib”) and political prisoner (“Ka Oryang”) in indie films.

For “Ka Oryang,” she scored a best supporting actress nomination from the critics’ Urian Awards.

Still, “Iloilo” felt like sweet vindication for the underrated actress.

She looks at the international exposure as a chance to make her teachers proud. “I trained in theater… starting with Tanghalang Pilipino. I owe all this to my mentors, Irma Adlawan and Anna Valdes-Lim,” she pointed out. “In every performance, I want to honor my teachers… so that when they watch my work, they won’t be embarrassed to say that I was their student.”

She regarded her Singaporean stint as an opportunity to push herself as an artist: “I am furthering my education.”

The only Filipino in the cast of “Iloilo,” she flew to Singapore in May and finished shooting last month.

Although the shoot was challenging, it taught her to fight for her beliefs and trust her instincts.

It also validated her local training as an actress. “I’ve always been open and approachable. I believe in making connections with your co-workers wherever you are. I learned a lot from the local crew – both the veterans and the interns.”

She understood her character’s dilemma (of being separated from her family) because she was away from her son during the filming.

“I’m a single mom. I didn’t want to miss my son’s first day in school. But my friends from the Theater Actors Guild looked after him. They volunteered to bring my son to school while I was away,” she said.

Bayani takes consolation in the fact that her small sacrifices are ultimately for her child.

“I’m thankful for the job. It’ll ensure a brighter future for my son,” she quipped.