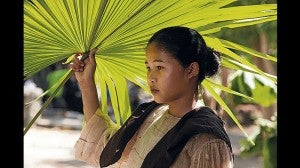 “Amigo,” a John Sayles film that has reaped acclaim in several international film festivals, explores the beginnings of the “long, complex relationship” between the Philippines and the United States through what the acclaimed US indie scriptwriter and filmmaker calls “an action-packed, dramatic and heart-moving epic.”

Set during the Philippine-American War that erupted in 1899, the film centers on Rafael Dacanay (Joel Torre), the cabeza  (head) of Barrio San Isidro, who is torn between keeping his village safe and obeying the colonizers.

According to Sayles, this conflict was based on what several Filipino cabezas really went through at that time. “[The story] is set in a very specific time and place — northern Luzon in the year 1900,” he wrote in the film’s study guide. “Through the Treaty of Paris in 1898, the United States ‘bought’ the Philippines from Spain for $20 million.”

He said the scenario was the result of a series of events, among them the decline of the Spanish regime in the Philippines, the uprising of the revolutionary group Katipunan and the signing of the treaty.

Screenings in North America are scheduled next month.

On June 28, an advance screening was held at the TriNoma Mall in Quezon City, simultaneous with the unveiling of an exhibit of costumes used in the film. The exhibit, titled “Veiled Memories of a Forsaken Past,” showcased the artistry of costume designer Gino Gonzales. It was on view at the TriNoma cinema lobby until yesterday.

“Amigo” received a PG-13 rating from the Movie and Television Review and Classification Board and was endorsed by the Department of Education. It has been touring schools and universities in Cebu, Davao, Baguio and Bacolod since February this year.