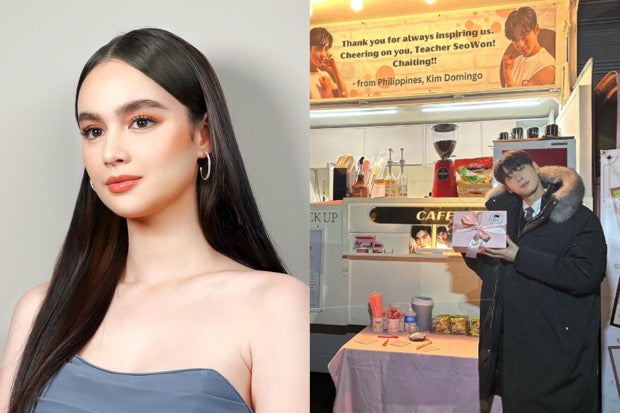 Kim Domingo expressed admiration and support anew to South Korean actor-singer Cha Eun-woo by sending him a food truck at what appears to be a film set of his upcoming series “A Good Day to Be a Dog.”

Cha Eun-woo, a member of the K-pop boy group Astro, extended his gratitude and showed himself beside the food truck via the group’s Twitter page on Tuesday, Jan. 10.

“Thank you for always inspiring us. Cheering on you, teacher Seo Won! Chaiting! From Philippines, Kim Domingo,” the truck banner says, referring to the actor’s character in the series.

“I ate delicious coffee, tea, sotteoksotteok, and [croffle] so well. Thank [you] so much.  Seowon teacher, chaiting!” the K-pop star tweeted in Korean.

This is not the first time Domingo went all-out in fangirling over Cha Eun-woo as she also attended his fan meet in Manila last August, then sent him a rice wreath at his Seoul fan meet in September.

Aside from being a K-pop star, Cha Eun-woo is known for his roles in several Korean series including “My ID is Gangnam Beauty” and “True Beauty.”  /ra