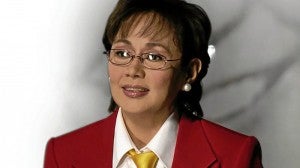 ATE VI stars in the new film “The Healing,” which marks her 50th year in show business. INQUIRER PHOTO

Batangas Gov. Vilma Santos Recto is not ashamed that she only finished high school, although she never stops learning.

Ate Vi, as she is commonly known, admitted she has read the encyclopedia of her sons, Luis and Ryan Christian.

The Star for All Seasons reads books to acquaint herself with current vital issues or, simply, to increase her knowledge.

But more than anything else, she said she has learned a lot from the many frustrations that came into her life.

“Nag-mature ako, kasama na ang aking mga fans (I matured, and so did my fans),” said the Famas (Filipino Academy of Movie Arts and Sciences) Hall of Fame awardee.

In 2005, the University of the Philippines (UP) conferred to her the Gawad Plaridel award for her achievements and contributions as an actress and a public servant.

In the same year, she was conferred an honorary doctorate degree (honoris causa) in humanities by the Lipa City College.

She was again honored in 2006 by UP as one of the four awardees in the university’s First Diwata Awards.

Ate Vi has garnered major acting honors from all the important award-giving bodies in the entertainment field.

She gave this piece of motherly advice to aspiring actors and actresses: “You should really work hard for it. Sincerity is first and foremost.”

She added: “It sounds corny but you should remember those who have helped you. That’s really very important.”

She has been a grand slam acting winner, capturing all the major trophies (from the Catholic Mass Media Awards, the Urian, Film Academy of the Philippines and Famas) for her moving performance in Ishmael Bernal’s “Relasyon.”

She is the the first and only Filipino actress to hold the distinction of having won three consecutive Urian best actress awards (for “Relasyon,” “Broken Marriage” and “Sister Stella L”), given by the country’s respectable film critics group, the Manunuri ng Pelikulang Pilipino.