Goodbye to a gifted, gentle guy 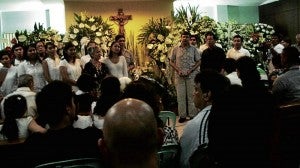 THE PETA choir renders a song from the play “Ang Palasyo ni Valentin,” which won for Mario O’Hara the top prize in the Centennial Literary Competition in 1998. ARNOLD ALMACEN/INQUIRER

It was a celebration of a life well-lived.

Colleagues from theater, radio, TV and the movies mounted a grand sendoff for filmmaker-actor-scriptwriter Mario O’Hara, 66, who passed away last week.

Most of the guests at the tribute on Friday night at the Saint Alphonsus Mary Liguori Parish near Magallanes Village in Makati felt O’Hara had left too soon.

Still, amid the tears, O’Hara’s closest friends chose to remember the good times—particularly the way he touched their lives in his own gentle, unobtrusive way.

The chapel was packed. In show-biz parlance, it was a box-office hit. 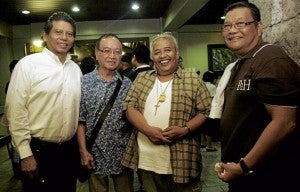 The program began with stirring performances from O’Hara’s peers from the Philippine Educational Theater Association (Peta). The Peta choir rendered a song from “Ang Palasyo ni Valentin,” which won for O’Hara the top prize in the Centennial Literary Competition in 1998.

It was a night of pleasant discoveries as family and friends recounted precious anecdotes about the gifted artist.

Soxie Topacio related that O’Hara was fiercely protective of him, even publicly berating a reporter who was clueless about the younger director’s body of work in theater.

When Topacio asked O’Hara to play the lead in the Peta play “Halik ng Tarantula” in 1988, the usually calm, cool guy unleashed an expletive out of sheer excitement: “Ay p_ _ _ ka! That’s my dream role!”

Fellow filmmaker Joel Lamangan recalled how O’Hara “forced” him to go naked on the set of “Mortal,” the late filmmaker’s debut movie in 1976.

Lamangan recalled: “He chided me because I was looking for a dressing room in the middle of the forest. He said: ‘Look at Lolita Rodriguez! She’s a trouper. She had no qualms about changing costumes in front of the crew.’ Oo nga, she was wearing a bikini under her dress.”

Topacio and Lamangan, O’Hara’s fellow thespians in Peta, both said the late artist helped them get their directorial breaks on television: Topacio (on “Carmi”) and Lamangan (on “Alindog”).

A recurring theme throughout the night was O’Hara’s generosity to colleagues.

Filmmaker Elwood Perez told the Inquirer that O’Hara passed on a project to him only a few months ago. “He asked a common friend to call me, to ask me if I could take over one of his projects.”

A poignant eulogy was delivered by TV director Rado Peru, who pointed out that he had his start in the business as a production assistant in the drama anthology “Lovingly Yours, Helen,” which O’Hara directed.

“He taught me everything I know about directing,” Peru said. “My family and I owe him a lot.”

Theater stalwart Nonon Padilla related that O’Hara, the exercise freak, would walk from his home in Bangkal, Makati to Roxas Boulevard and then Rizal Avenue and Divisoria in Manila, after which he would retrace his steps back home.

Padilla quoted O’Hara as saying: “It is while I walk that I get the inspiration to write.”

It was during one of those long walks that O’Hara met and interviewed a taong grasa (street urchin), whose story became the basis of the film “Ang Babae sa Breakwater,” which was shown at the Cannes Directors’ Fortnight in 2003.

“He kept all the old radio scripts that I wrote for him,” said writer-actress Mely Tagasa, more popularly known as Miss Tapia.

Also present at the tribute were members of the O’Hara family, led by 91-year-old mother Basilisa Herrero-O’Hara.