The family of teen actress Sue Anna Ramirez had the most traumatic experience when Tropical Storm “Ondoy” ravaged Metro Manila in 2009.

“We lost power when Ondoy struck and we needed it for my dad’s electric respirator. His oxygen tank was empty,” Sue Anna told Living Stars during a visit to their home in Parañaque City.

Sue Anna’s dad, James Peter Dodd, a retired senior officer of the US State Department, suffered a stroke in 2002 and has since been dependent on his own respirator.

“My cousin had to drive all around the area in the pouring rain to look for a store where we could refill the oxygen tank. He almost drowned,” Sue recalled that fateful day, adding that they also needed electricity to operate her dad’s food processor.

“We had a generator but its power wasn’t enough to run the respirator,” added Sue’s mom, Concepcion. “All our electrical appliances were damaged. We were caught off-guard.” 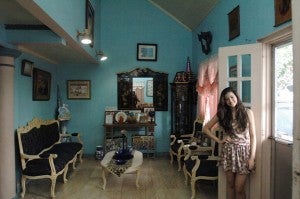 Concepcion added: “We were having breakfast when floodwaters came rushing into the house. I remember that I just got back from a trip to Brussels (Belgium) when it happened. I couldn’t imagine what could have happened to my family if Ondoy came when I was still abroad.”

The Dodds’ two-story house was built in 1986. What used to be a charming French country home has already undergone numerous renovations as a result of periodic flooding in the area.

“I still want to make our flooring a little higher. We also experienced flooding when another storm struck in 2011. The creek that’s close to our house would always overflow.” 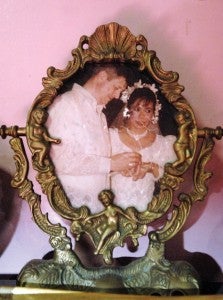 A FLOOD-DAMAGED wedding photo of her parents

High fences have been built around the 186-sq m lot and a steel gate was installed in 2005. Balete and palm trees, as well as fortune plants, were planted recently.

“I used to be a collector of antiques, but I had to give away most of them. It’s hard to take care of them in a house like we have,” said Concepcion, as she showed some of her porcelain jars and figurines. “These are authentic pieces from the Ming Dynasty. They even have certifications.”

She said she managed to preserve portraits of Sue Anna’s grandma that were painted in the 1970s. “My father personally made their wooden frames,” she revealed.

Concepcion also showed a charcoal drawing she personally made of her wedding photo in 1993. “I already sold or gave away most of my paintings. Those I couldn’t part ways with, I placed in my office.”

Concepcion is the vice president of the Trade Union Congress of the Philippines. She is also general secretary of the Confederation of Labor and Allied Social Services.

Sue Anna’s mom said that before her husband’s stroke, they were saving up to develop their beach-front property in Negros. “We had to use the funds for his medical treatment. He regularly goes to Parañaque Doctors Hospital for his checkups.” 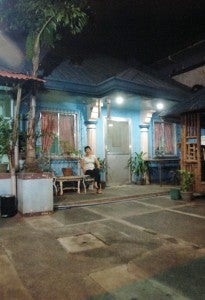 Sue Anna said the family’s lifestyle has changed a lot since her dad got sick. “We used to go out of town every weekend when he was still stronger,” she recalled. “I was so young when it (stroke) happened, just six years old, but I already understood that there was something wrong with him. His speech was affected, as well as the right side of his body.”

She continued: “I really want him to get better, at least improve his ability to talk. Right now, all he can say are ‘yes,’ ‘well’ and ‘I’m fine.’”

Concepcion said this was why Christmas reunions were always held at their house. “Relatives come over,” Sue Anna added. “We all gather in the garage during Christmas Day. Ga-bundok ang mga gifts! We sing and eat together. We do this every single year.” 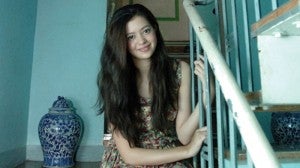 SHE HAS scars from falling down the stairs.

Sue Anna said she had a lot of unforgettable memories here while growing up. “I was so clumsy when I was little. I will never forget the time when I fell and cut my chin. I was in one of the upstairs bedrooms when it happened. I got scared because I saw so much blood,” recalled the star of “Angelito Ang Batang Ama: Book 2” on ABS-CBN.

She continued: “I would also get cuts and bruises from falling from the stairs. I have scars to remember all those moments with.”