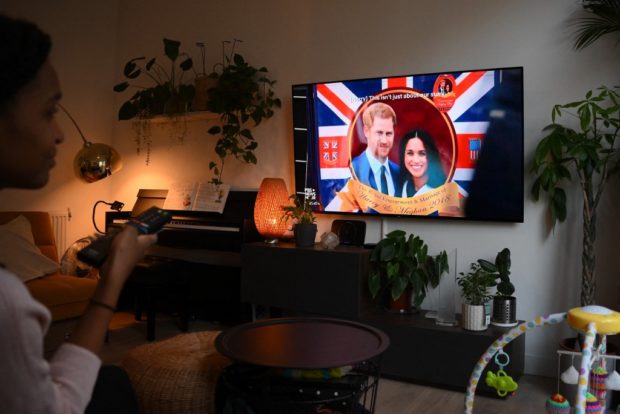 A woman poses as she watches an episode of the newly released Netflix docuseries “Harry and Meghan” about Britain’s Prince Harry, Duke of Sussex, and Britain’s Meghan, Duchess of Sussex, in London on Dec. 8, 2022. Britain’s media, the main focus of criticism so far in Netflix docuseries “Harry and Meghan,” on Friday, Dec. 9, hit back at the estranged prince and his wife, accusing them of lying and insulting Queen Elizabeth II. DANIEL LEAL / AFP

LONDON—Britain’s media, the main focus of criticism so far in Netflix docuseries “Harry and Meghan,” on Friday, Dec. 9, hit back at the estranged prince and his wife, accusing them of lying and insulting Queen Elizabeth II.

The royal family was largely spared during the first three episodes of the show, which aired on Thursday, with the focus more on Harry’s early life and his resentment toward the media, which he blames for the death of his mother Diana.

But the prince did accuse the family of unconscious racial bias, and the royals will be braced for next week’s installment, which threatens more revelations.

The saga dominated Friday’s newspaper front pages, which were largely critical of the Duke and Duchess of Sussex—Harry and Meghan’s formal titles.

“Harry the Nasty,” said the headline of popular tabloid the Sun, which added the couple had “trashed the Queen’s legacy,” left Harry’s father King Charles III and his brother Prince William in a “state of sadness” and unfairly tarnished the whole country as racist.

The paper, along with many others, picked up on one scene in which Meghan performed a melodramatic curtsey as she recalled meeting Queen Elizabeth II for the first time.

“How low can you go?” asked the tabloid, adding that “mocking Meghan exaggerated a curtsey to poke fun at the royals—and compared their traditions to a tacky US medieval chain.”

The Daily Mail, the right-wing newspaper that has clashed most often with the couple, led with the headline “palace anger at ‘assault on the Queen’s legacy’,” and carried almost 20 pages of coverage on the show.

Inside, one commentator took issue with their claim that Brexit had fueled racism in the UK and contributed to their eventual split from the family, calling it “the most insulting distortion.”

Conservative MP Bob Seely said late Thursday that he plans to bring forward legislation to strip the couple of their royal titles.

“There is a political issue,” he said. “As well as trashing his family and monetizing his misery for public consumption, he is also attacking some important institutions in this country.”

The Mail also dedicated four pages to rebutting what it called the couple’s “fantasies and lies,” including their claims of an unrelentingly hostile media and stories about their first date and engagement.

It also claimed that the show had “cynically doctored” previous media interviews with the couple.

The broadsheets also dedicated their front pages to the show, with the center-right Daily Telegraph also leading with the “‘direct hit’ on the queen’s legacy.”

The Times ran with the less polemic headline “Palace and Netflix clash over Sussexes soap opera,” although one commentator implored: “Please make it stop Netflix, I can’t take any more of this self-centered nonsense.”

The left-wing Guardian newspaper was more supportive of the couple, and focused on Prince Harry’s criticism that the royal family did not protect Meghan against racially charged reporting.

The center-left Daily Mirror, which is generally less critical of the couple than its right-wing counterparts, slammed the show, calling on its front-page to “stop this royal circus.”

“Just two months after our Queen died, Prince Harry is bemoaning his treatment again… Prince William is venting his fury again… Meanwhile, thousands of ordinary Brits are choosing between eating and heating.”  /ra