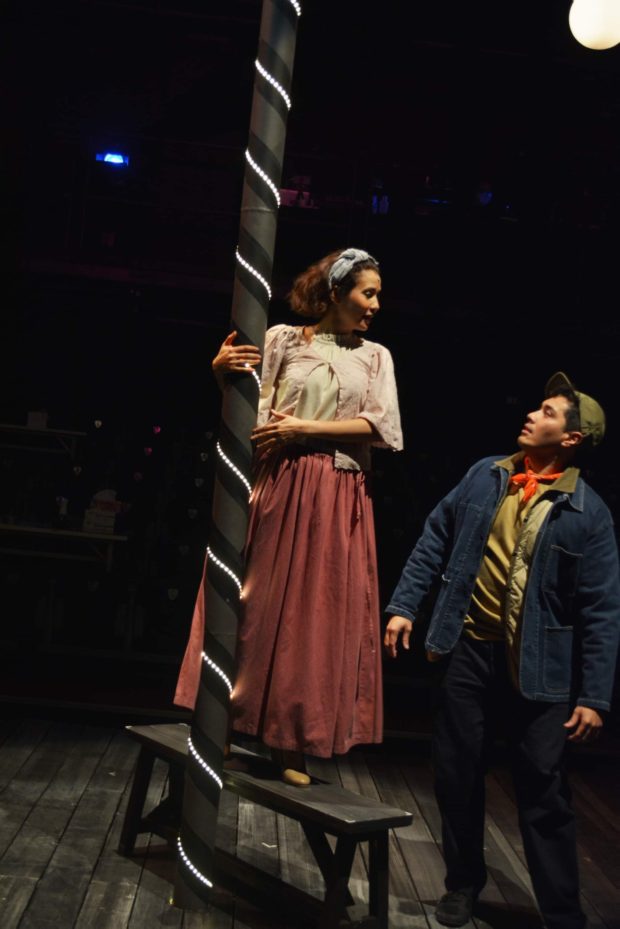 MANILA, Philippines — Karylle and Gian Magdangal are back on the musical theater stage, and they will lead the cast of Repertory Philippines’ staging of Rodgers and Hammerstein’s “Carousel” that marks not only the theater company’s return to live productions, but also their 55th anniversary this year.

Dubbed by Time Magazine as the greatest musical of the 20th century, “Carousel” tells the story of Billy Bigelow (portrayed by Magdangal) and Julie Jordan (played by Karylle) set in the “Great Depression” of 1920s United States. Under the direction of Toff De Venecia, the current iteration utilized post-modern techniques in presenting the narrative to its audience.

“Though we had handouts, I personally do not understand post-modern. And my husband is a literature major, so when he saw me reading the handouts he was so proud. He said, ‘finally she will be able to understand me,’” Karylle confessed at the end of the media preview show on Nov. 26.

But the TV host-actress said she approached the role with an open mind, and later appreciated the unconventional methods employed in staging the production. “So when I started seeing these things, there are no rules. It might have sounded cliché at the beginning, but I was like ‘wow, it’s really taking form!” she exclaimed.

“We can figure out what we wanna do? You’re not gonna block us? Those were the questions. All these things started to happen. In the space, I don’t think he had decided beforehand, so then you see the beauty of creation,” Karylle added.

She also joked about De Venecia evolving “from Billy Bilyonaryo to Billy Bigelow,” a throwback to the stage director’s former TV show as a child actor.

For his part, Magdangal was grateful for his first lead role under Repertory Philippines. He was part of the original cast for the 2020 staging, and said he appreciates being called back to still be a part of the leaner production this year.

From a pool of 30 cast members in 2020, the current “Carousel” roster only has a little over a dozen actors, with some of them playing multiple roles. The current staging venue also only allowed a few people on and off the stage, which presented challenges, that resulted in major deviations from the originally intended rendition of the musical.

“It’s something that you’re passionate about, and you meet someone that you can trust, like Toff as director. He had this vision already in 2020 when we were supposed to do this, and then it didn’t happen. And I was really grateful that he still allowed me to be a part of it,” Magdangal said.

“We all approached this coming from a place of overwhelming gratitude. So many things have changed for many of us. You may have a job, and now you don’t have a job, or you may have suddenly become a father, or suddenly you lost loved ones in your life,” he continued.