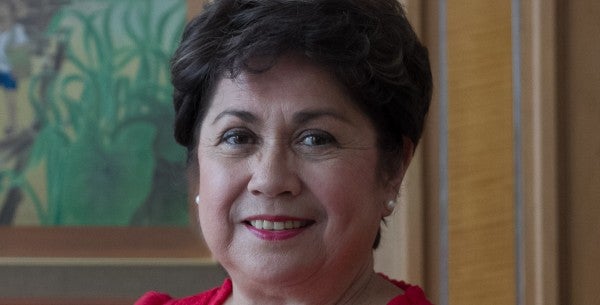 Nova Villa at the GMA Artist’s Center back in 2015. She appears with Coco Martin in “Labyu with an Accent,” an entry in the 2022 Metro Manila Film Festival. Image: INQUIRER/Alexis Corpuz

Veteran actress Nova Villa admits she is a fan of Coco Martin and her working with the actor in “Labyu with an Accent” is a dream come true.

“I am a fan of Coco,” she unabashedly admitted during the grand mediacon for the movie on Wednesday, Nov. 30.

“Noon pa, sabi ko, gusto ko itong makasama. Sana maging anak ko, anumang role. Basta, mesmerized ako sa kanya, hindi naman crush,” she said. (Even before, I wanted to work with him. I hoped he could be my son, whatever role. I’m just mesmerized by him, but this is not crush.)

Until she met him at a wake for a director.

Until she talked to one of the production people. She asked one to make a way for her to be introduced to Martin.

“Nag-picture kaming dalawa, sa punerarya pa (We had a picture together, in a funeral home at that). Enjoy na enjoy ako. I kept that picture,” she said.

Her excitement grew when a few years later, her manager told her about an offer to work with Martin.

She was almost in a daze after hearing the good news.

“Sabi ko sa ‘yo, three days puwedeng maglambitin si Tarzan sa eyebags ko. Ganoon pala ang fan,” she said. (I can tell you, for three days Tarzan can hang from my eye bags. That’s how a fan is.)

But Villa clarified that she didn’t have many scenes with Martin as she plays Jodi Sta. Maria’s grandmom in the movie.

“Labyu with an Accent” is one of the official entries in this year’s Metro Manila Film Festival which opens on Dec. 25.  /ra

Nova Villa super fan ni Coco Martin: It’s been my dream to see him in person