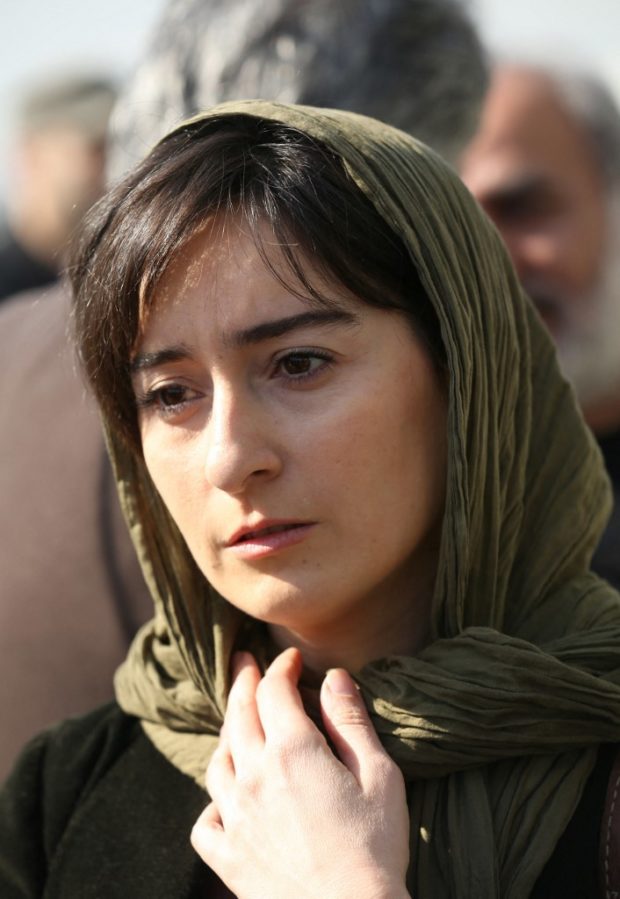 Iranian actress Soheila Golestani arrives for a press conference as part of the 33rd Fajr International Film Festival on Feb. 2, 2015, in the capital Tehran. Golestani, who has appeared without her headscarf in a video, along with male director Hamid Pourazari, who also appeared prominently in the video, have both been arrested, the US-based Human Rights Activists News Agency said on Nov. 30, 2022. AFP PHOTO / ATTA KENARE

PARIS—Iranian authorities have arrested the two actors behind a viral video where a group of film and theater figures stood silently without headscarves in solidarity with the protest movement, a rights group said Wednesday, Nov. 30.

The actor and director Soheila Golestani, who appeared without her headscarf in the video, and the male director Hamid Pourazari, who also appeared prominently, have both been arrested, the US-based Human Rights Activists News Agency said.

It was not clear where they were being held, it added. Some reports suggested they had been detained as the World Cup football clash between Iran and the US got underway late Tuesday but this could not be immediately confirmed.

In the video, Golestani, wearing black, walks into the shot without a hijab and turns around to reveal her face, looking directly into the camera.

Nine other women then join Golestani with the same gesture, as do five men.

The Iran Wire website said all those in the video were Iranian actors. It was not clear if they too risk arrest.

Prominent Iranian playwright Naghmeh Samini confirmed on her Instagram account that Golestani and Pourazari had been arrested.

She described the arrests as the “reaction of some of the audience” to a “performance.”

The death in September of Mahsa Amini, 22, who had been arrested by the notorious Tehran morality police, has triggered more than two months of protests which pose the biggest challenge to the clerical regime since the 1979 Islamic revolution.

Several Iranian actors have during the protest movement made taboo-breaking gestures of removing their headscarves, which are mandatory for women in the Islamic republic.

Earlier this month Taraneh Alidoosti, one of Iran’s best-known actors remaining in the country, posted an image of herself on social media without a headscarf.

Iran also arrested two prominent actors, Hengameh Ghaziani and Katayoun Riahi, who expressed solidarity with the protest movement and removed their headscarves in public in an apparent act of defiance.

Both have now been released on bail, reports said.

Iranian cinema figures were under pressure even before the start of the protest movement sparked by Amini’s death.