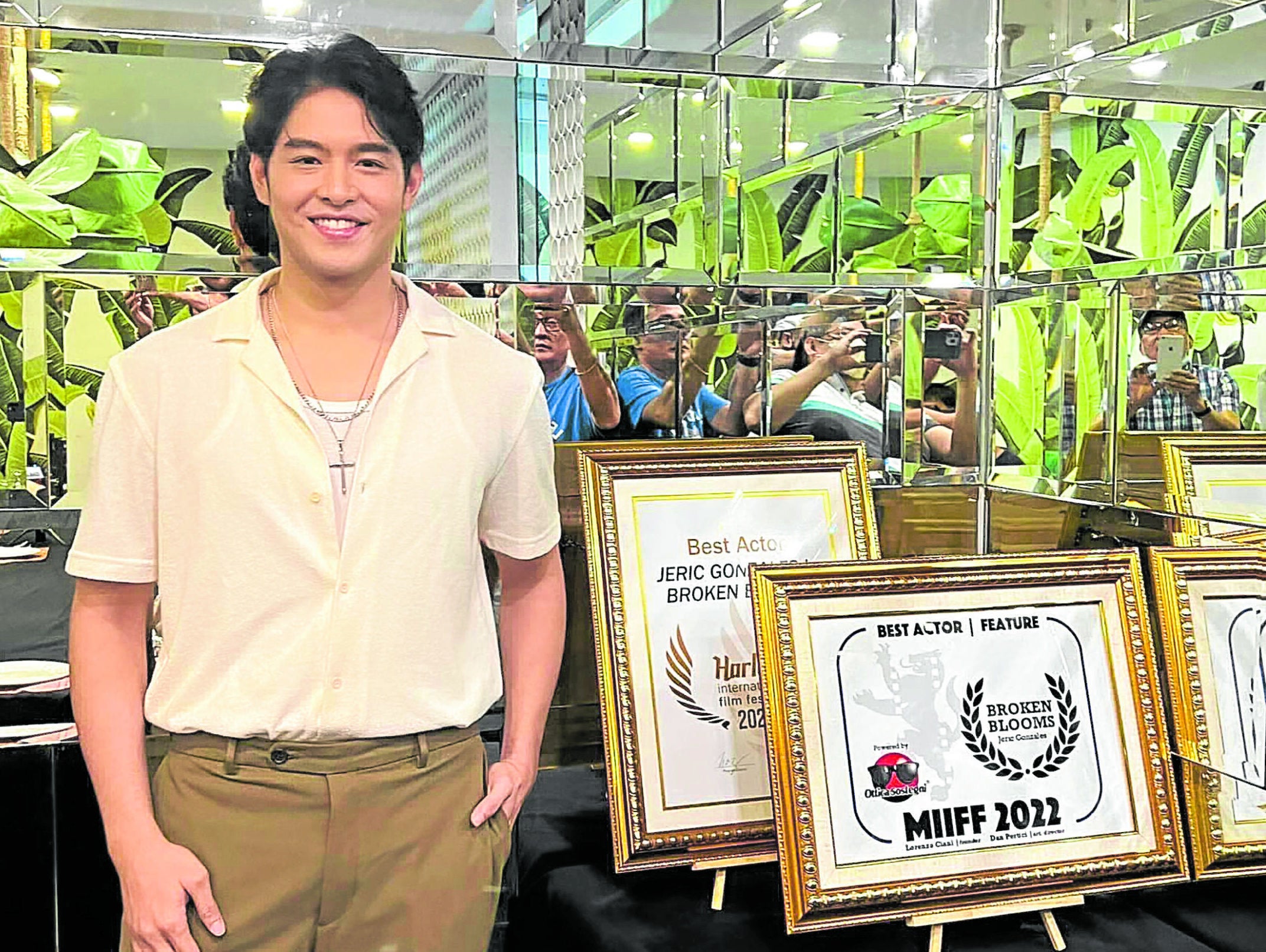 Jeric Gonzales poses with his citations.

In his 10 years in show biz, Jeric Gonzales has had to bear criticisms that his good looks and physique are the only things he got going for him. But he refused to take them to heart or let them dampen his hopes of winning acting awards one day.

Having such achievements at the age of 30, one might say that he’s a late bloomer. Thankfully, not once did Jeric feel impatient or think about giving up.

“It’s all about perfect timing. Hindi ako nainip … There are things that are meant for you. But if the time isn’t right, don’t force the issue. I’m thankful that these things are happening to me right now, because my past experiences prepared me for them,” he told the Inquirer at a recent press conference for said film.

“It has always been my dream to become an award-winning actor. I hoped to attend festivals to promote Filipino films abroad. I had no expectations. But luckily, my acting got recognized and managed to win awards. I’m very happy with how my career is going right now,” he said.

Directed by Louie Ignacio, “Broken Blooms”—which opens in cinemas on Dec. 14—follows Jeremy (Jeric) and his tumultuous teenage marriage with Cynthia (Therese Malvar). Because of the pandemic, Jeremy loses his job. And with no means to provide for his wife and their child, he decides to work as a masseuse. But because he was unable to finish his degree in physical therapy and doesn’t have a license, his abilities are always put into question.

“I have yet to prove anything in film. It’s my first lead role, so I was determined to do the necessary preparation and do my best. Direk Louie’s and my goal is to show off my acting skills. We did workshops. I sat down with Direk Louie and our writer Ralston Jover to make sure the story was clear to me before shooting,” he related.

Jeric was Therese’s first onscreen kiss. And he made sure to make her feel comfortable. “At first I thought it was tough that I had to be his partner for her first kiss onscreen. But I tried to open up to her and asked her to tell me what I had to do to make sure she was comfortable. Eventually, we were able to build rapport,” he said.

Meanwhile, he admitted that he couldn’t help but feel starstruck by Jaclyn in some of their scenes. “She transforms during our takes. It’s amazing what she does in our scenes. Sometimes, I get surprised. But I have to continue and commit,” he said.

The awards he received for his performance in “Broken Blooms” was just the confidence boost he needed, going into the taping of GMA 7’s local adaptation of the hit K-Drama “Start-Up.”

“I felt more confident because I was able to do a meaningful project, working with an award-winning cast, director and writer. I did my job well, so that’s a milestone in my career. Finishing the movie alone was an achievement for me,” Jeric said. “Knowing that made me more confident that I can hold my own with my costars Alden Richards, Yasmien Kurdi and Bea Alonzo.”

As far as love life is concerned, Jeric—who broke up with beauty queen Rabiya Mateo earlier this year—said he isn’t exactly opposed to being in a relationship, but he would rather keep his career momentum going. “If it comes, why not? But for now, I’m holding on that momentum, from ‘Broken Blooms’ to ‘Start-Up.’ I hope to sustain that for my upcoming projects,” he said.

Juggling career, love life and family obligations is difficult, Jeric admitted. “You need to have priorities … choose what’s the best for you, your goal and dreams,” he said.