Kris Lawrence excited about being a dad 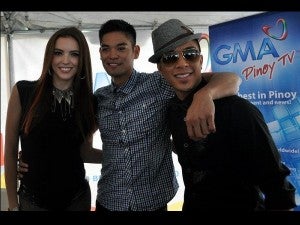 NEW YORK CITY—Singing sensation and soon-to-be-a-dad Kris Lawrence was all about celebration.

At the June 24 FilAm Friendship Parade and Festival organized by Pafcom, he was celebrating Filipino-American unity – and also the coming of his first child, KatRence, to be named after him and girlfriend Katrina Halili.

Watching the high-energy Kris at the Pafcom parade, one could tell he and Katrina have put the ugly sex scandal behind them. In 2009, Katrina figured in an illegally filmed and widely circulated sex tape
with cosmetic doctor Hayden Kho. There was a congressional investigation and the next we heard about the actress was having a child with the Star in a Million singer.

“We’re here to celebrate something special,” Kris, an artist of GMA International, said.

He would later share with the crowd gathered at the Lincoln Park in Jersey City his feelings about his impending fatherhood.

“This is going to be a challenge for me dahil magkakaroon na ako ng anak,” he said. “I may lose some of my young followers. But talent will always prevail. I will continue to make more music and hopefully
still touch the hearts of everybody. They don’t have to be a fan of me but they can be a fan of my music. A lot of my free time will go to my baby KatRence.”

The crowd welcomed Kris’ confession and went wild when he sang some Bruno Mars’ hits and his signature ballad “Kung Malaya Lang Ako.”

Kris was joined by fellow GMA artists R & B singer JayR and pop star Krista Kleiner. Krista, a former beauty titlist, did a couple of danceable numbers by Jennifer Lopez and Nicki Minaj, while JayR regaled with pop tunes and his popular “Bakit Pa Ba.” 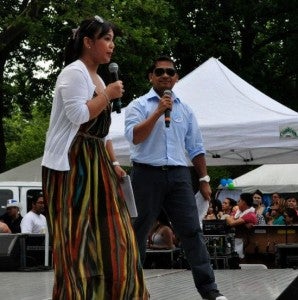 Festival chair Jeanette Mojares said the audience was “truly entertained by wonderful performances” from the GMA artists, Krista, JayR and Kris Lawrence. “We appreciate your professionalism,” she said.

Eduardo Pena, president of the Philippine-American Friendship Committee, said he was pleased at how the day turned out well. “Everyone worked well together. The event is a tribute to the teamwork everyone displayed.”

The segment GMA Celebrity Hour was hosted by Grace Hufano Labaguis, GMA International’s marketing consultant for the East Coast, and yours truly.