Playing at the Olympics? Kylie says brace yourself 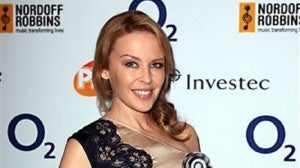 LONDON— Kylie Minogue’s got some advice for musicians appearing at the London Olympics: Prepare to be amazed.

The Australian sang at the closing ceremony of the Sydney Games in 2000 and also at the opening of the Paralympic Games two weeks later.

The pop singer reckons talent like Coldplay, Snow Patrol, Blur and Duran Duran have a special experience ahead.

Minogue says: “I still am thrilled at the memory of performing there because, doing it in your own country there’s such a sense of pride that you’re hosting the Olympics, and then to be at the center stage of the event is just extraordinary.”

Minogue spoke at the Nordoff Robbins Silver Clef Awards in London, where she was honored for her 25 years in show business.