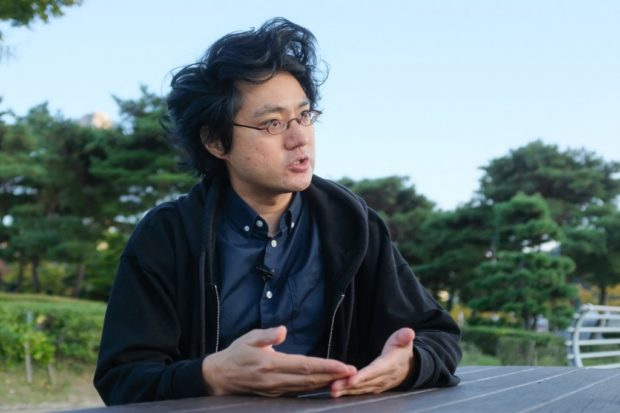 This picture taken on Oct. 11, 2022, shows French-Cambodian director Davy Chou speaking during an interview with AFP for his film “Return to Seoul” at the Busan International Film Festival in Busan. It’s Cambodia’s next Oscars entry, has a Korean-born and France-based star, a French-Cambodian director and was shot in South Korea. If “Return to Seoul” sounds difficult to categorize, that’s precisely the point, director Davy Chou told AFP. PHOTO: Yelim Lee / AFP

BUSAN, South Korea—It is Cambodia’s next Oscars entry, has a Korean-born and France-based star, a French-Cambodian director, and was shot in South Korea.

The film follows Freddie, a mercurial and ruthlessly unapologetic Korean-born French adoptee who, at the age of 25, embarks on a quest to find her birth parents.

Freddie is constantly fighting against “people always wanting to place her in a box, (whether) she’s considered French or Korean or adoptee,” Chou told AFP.

And the frustration some South Korean viewers at the recent Busan Film Festival expressed in their bid to pinpoint “the film’s origin or nationality” is a key parallel to this on-screen battle, he said.

Born in France to Cambodian immigrants, Chou discovered in his teens that his grandfather had been one of the Southeast Asian country’s leading film producers in the 1960s.

Like Freddie, Chou made a life-changing trip to his family’s native country at 25.

He now lives in Cambodia and says his work is influenced by his own experiences of the “question of double culture and double identity and how you deal with that.”

The plot in “Return to Seoul” was inspired by Chou’s experience accompanying a friend, a Korean-born adoptee, on her journey to reuniting with her birth parents.

The high-profile joint production—its credits are a who’s-who of indie cinema from Paris to Phnom Penh—follows a wave of successful South Korean and diasporic entertainment, including Oscar-winning “Parasite” and Apple TV+’s “Pachinko.”

“Return to Seoul” was just one of the films with non-Korean directors and Korean crews to screen at the Busan fest, including Singapore’s Oscars entry “Ajoomma” and Japanese filmmaker Hirokazu Kore-eda’s “Broker”—which explored South Korea’s “baby boxes” where infants are abandoned.

“Return to Seoul” subverts South Korea’s narrative on adoption, in particular the spectacle of tearful, seemingly heartwarming reunions between birth parents and adoptees that have repeatedly featured on domestic television.

It also touches on the absurdity of South Korea’s adoption laws, which prioritize the birth parent’s right to privacy over the rights of the adopted, and require authorities to communicate with parents exclusively by old-fashioned telegrams.

The film’s complicated protagonist is almost impeccably played by first-time actor Park Ji-min, an artist who—like Freddie—was born in South Korea but grew up in France.

For Park, who moved to France with her family at age 9, the film was a rare chance to create the kind of Asian woman character she had wanted to see in French cinema.

In France, Asian women are still overwhelmingly viewed as “obedient, accommodating to what men say, and domestic,” Park told AFP.

“As an Asian woman, I’m immensely proud to have played such a rare-to-find woman character in a French movie,” she said.

Freddie is frequently fierce and direct—even during her traumatic reunion with her birth father’s family.

Busan Film Festival programmer Park Sung-ho said that, while Chou’s film may not be a South Korean movie in legal terms—most of its financing came from Europe—it is still “clearly a Korean film.”

“We are living in an era where the definition of Korean cinema is forever expanding,” he told AFP.

“The topic of adoption has been around in South Korea for decades, and had a Korean director made this movie, it actually could’ve been rather boring.

“It makes us look at what we thought we were in a different way. That’s what ‘Return to Seoul’ manages to do.”  /ra