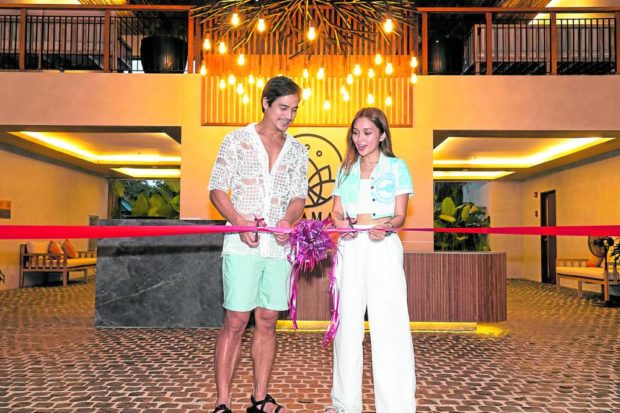 Piolo Pascual (left) and Kathyn Bernardo collaborate on a project, but it’s neither for the big nor small screen.

“It was a very brave thing to do,” said Piolo Pascual of the decision of Kathryn Bernardo to partner with him on a project.The project, however, is neither for the big nor small screen. The two Kapamilya artists got together to open a new boutique resort called Isla Amara on Lio Beach, Palawan.

“This is admirable for her age. She inspires young people to do the same, to be smart in handling their finances. She does not limit herself to whatever business she has at the moment,” Piolo said in a virtual interview during the soft opening of the resort.

“It’s a good investment,” declared Kathryn. “I’m not getting any younger. It’s good that my mom is here to guide me. I’m turning 27 soon, so it’s about time that I start investing for the future.”

El Nido, Palawan, is the one and only choice for Piolo. “I like the island vibe. I like the fact that the area is not as busy, not as urbanized as the others. Also, it’s just a flight away. I come here to rest, to get away from loudness of Manila, as well as the pollution,” he added.“I’ve always loved El Nido. If I would be asked to name the first place in the Philippines I’d go to in order to relax and bond with my family, I’d say here,” declared Kathryn. “The pandemic was a blessing in disguise for us. It was during that time when we were asked if we wanted to join the business. This is actually a pandemic baby. The location is beautiful, so we took the opportunity to buy it.”

For Piolo, however, “more of the same business venture is in the pipeline. This is just the beginning. For our other partners here, this is already their fifth or sixth business venture in the hospitality industry, so they already know what to do. This is a good thing because it’s no longer such a hassle for me and Kath.”

Kathryn said everything started as “katuwaan lang.” She didn’t expect it would turn into a reality so quickly. “It’s good that we have experts as partners. In this business, you need someone who will guide you. It’s them. They’re very experienced. They also said it’s OK to start small, to just try things out first.”

For her, Isla Amara is a manifestation of a long-time dream. “Whenever I get asked during interviews about what I want to have or accomplish 10 to 20 years from now, I would always say, ‘I want to have my own boutique hotel in El Nido.’ I’m so grateful that it finally happened. I would always feel happy when I do activities related to the beach. This relaxes me, recharges me. I just can’t believe that it was fulfilled this early. Everything happened so fast.”Kathryn said she would also offer her input in creating the resort. “They asked me about the look and feel of the rooms and the reception area. They also consulted me on the name and logo. I appreciated it that they respected my decision, but I’m really here more as an observer. I want to be able to learn as much as I can about the business from them,” she pointed out.

Recalling the time he was first introduced to the idea of a boutique hotel, Piolo said: “I’m friends with the people who got the offer to buy the hotel. One thing led to another, and we were able to form a corporation. It would have been too hard for me if I was on my own. I don’t have that much time for it. It’s better to have partners who know the job better.”

Meanwhile, Piolo said he is building a similar establishment near his farm in Batangas. “Construction is ongoing now. My brother is involved there, too. This is our guinea pig. We’ll first see where this goes. Admittedly, the hospitality business is new to me. I’m enjoying the grind. I have partners who are hands-on, very collaborative. I make it a point to listen, to learn from them so that when I talk to people about the business I know what I’m saying,” he explained. “This is important to me because this is what I’ve always wanted to do on the side when I’m not acting. I see that now is the perfect time because I am already able to diversify and manage my time. I now have the luxury of time to learn and grow as a businessman.”

Piolo is currently on a monthlong tour of Canada and the United States for a series of concerts with Jericho Rosales. In December, he will start shooting an action-drama film with young actor Kyle Echarri. He will then shoot alongside Sam Milby, “and a surprise leading lady,” for a series that will be streamed on Netflix. In March, he will begin rehearsing for a play that will be staged at the Cultural Center of the Philippines.

On the other hand, Kathryn has just returned from a Halloween trip to Japan with boyfriend Daniel Padilla, and friends Ria Atayde, Zanjoe Marudo and Joshua Garcia. In January, she and Daniel will sit down with ABS-CBN executives for a movie that they will shoot and release in 2023. INQ