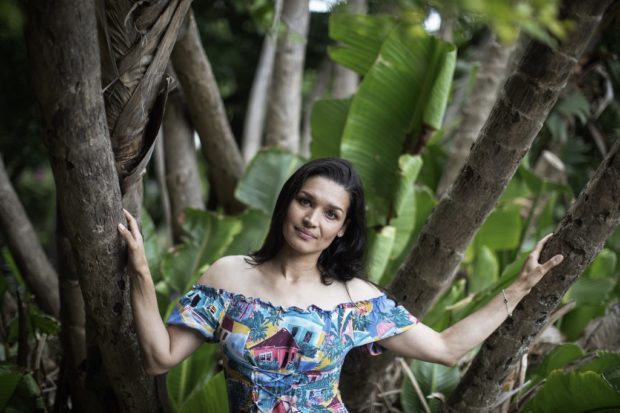 Born and raised in the picturesque city, the Emmy-nominated actress is a well-known face here.

“My wife will be happy,” gleams a caretaker at the central Company’s Gardens park as he takes a selfie with the star.

“People think they know you, it’s quite endearing this sense of familiarity,” she tells AFP, sporting a bright multi-colored summer dress.

“The South African audience has known me for a long time.”

The actress started her long career in television as the host of a youth development show before getting her first movie role in an Italian production at the age of 12.

Her breakthrough came with “Isidingo,” a popular dinnertime South African soap, on which she appeared for 12 years.

But it was her first leading role—that of a criminal profiler investigating a string of murders in the sugar cane fields of the eastern KwaZulu-Natal province in the crime series “Reyka”—that won her an Emmy nomination.

Engelbrecht is up for the Best Performance by an Actress prize at the International Emmy Awards, which honor TV shows made outside the United States.

“Reyka,” which was shot during the coronavirus pandemic, has also been nominated for Best Drama Series.

“In the middle of Covid, filming a female-led drama series, it was a big deal for me,” Engelbrecht says of her role.

Only the fifth African female actor ever to receive a nomination, she says she hopes her career will help motivate other young South Africans chase their dreams.

“Your dreams are valid. Hard work and dedication don’t go unnoticed,” she says.

Winners of the accolade are to be announced at a ceremony in New York on Nov. 21.

Engelbrecht has already had a taste of Hollywood, having starred in superhero TV series “The Flash” and sci-fi drama “Raised by Wolves” produced by Ridley Scott.

Yet, the actress who grew up in the working-class suburb of Belhar, east of Cape Town, is keen to continue work in her homeland.

“I enjoy working in South Africa, these are my roots, this is who I am,” she says.

Since her nomination she has received many scripts, and would like to have a go at comedy.

“Why not?” she says with a smile, signaling with a wave of her hand to some park walkers who stopped upon seeing cameras that they are welcome to pass through.  /ra