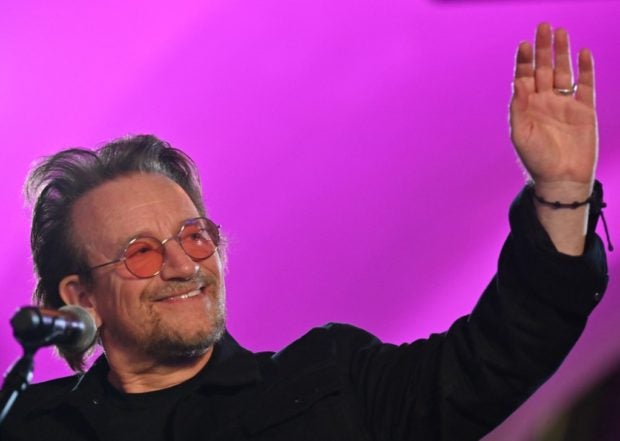 (FILES) In this file photo taken on May 08, 2022 Bono (Paul David Hewson), Irish singer-songwriter, activist, and the lead vocalist of the rock band U2, greets people as he performs at subway station which is bomb shelter, in the center of Ukrainian capital of Kyiv. (Photo by Sergei SUPINSKY / AFP)

NEW YORK — U2’s Bono on Tuesday released his memoir “Surrender,” detailing the journey from his youth in Dublin to fronting one of the world’s most prominent rock bands.

The introspective book is organized across 40 different U2 songs, including 40 original drawings.

The 62-year-old artist born Paul David Hewson is a long-time humanitarian well-known for lending his voice to a variety of causes, including the fight against poverty and AIDS.

In his more than 500-page book, Bono delves in to those ambitions but also his growth as a teenager struck by tragedy — his mother died suddenly when he was 14 — and an account of his heart operation in 2016.

He also waxes on the perplexities and finer points of songwriting, and “the pseudo-religious part of being a rock star, how we put the messy in messianic.”

“U2’s music was never really rock ‘n’ roll,” he writes in the book. “Under its contemporary skin it’s opera — a big music, big emotions unlocked in the pop music of the day.”

The rocker is promoting the memoir with a 14-date book tour entitled “Stories of Surrender,” which kicks off in New York this week and includes stops in Chicago, London, Berlin, Paris, Madrid and, of course, Dublin.

“When I started to write this book, I was hoping to draw in detail what I’d previously only sketched in songs,” Bono said in a statement when the book’s publication was announced earlier this year.

“Surrender is a word freighted with meaning for me. Growing up in Ireland in the seventies with my fists up (musically speaking), it was not a natural concept,” he continued. “I am still grappling with this most humbling of commands. In the band, in my marriage, in my faith, in my life as an activist.”

“Surrender is the story of one pilgrim’s lack of progress… With a fair amount of fun along the way.”

‘You can’t compromise on human rights’ – Bono to Duterte