Loving ‘Rock of Ages’ just a little too much 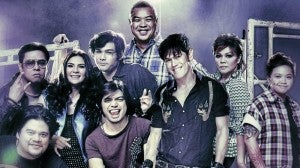 When the Manila production of the stage musical “Rock of Ages” opened in the same week as its film adaptation of the same title, it could’ve gone either way—the stage musical would suffer due to the film version’s powerhouse cast led by Tom Cruise, Catherine Zeta-Jones and Alec Baldwin; or it would benefit from the exact same reasons.

Well, things seem to be working in Atlantis Productions’ favor, because the entire run of “Rock of Ages” at the Carlos P. Romulo Auditorium of RCBC Plaza Makati until July 8 is officially sold out.

This jukebox musical—which features some of the biggest hits of 1980s pop-rock (Foreigner, Styx, Jefferson Starship, REO Speedwagon) and hair metal bands (Poison, Whitesnake, Twisted Sister, Quiet Riot and many more)—does certain things for audience members: For one, the songs instantly transport them back to the days of oversized shoulder pads, epaulets and appalling hairstyles.

For those born much later, this is exposure into fashions that should be forgotten (where’s that “Men in Black” light thing when I need it most?), as well as an introduction to what hair/glam metal is all about.

I’ve seen this show twice in New York City—the first time a few days after its opening, and again about a year later. It opened in 2009, and it’s still running. Audiences apparently enjoy it.

It doesn’t hurt, either, that alcohol is served not only at the bars in the venue (the musical is now playing at the Helen Hayes Theater on West 44th Street), but also inside the actual performance space, with waiters going up and down the aisles taking drink orders.

Here in Manila, because of theater rules, booze is off-limits, although the audience can actually have a few drinks at the lobby before heading to their assigned seats. I saw people gulping down colorful, syrupy concoctions right before the first notes of the music were played. But the show itself is intoxicating, thanks to the performances from an amazing, stellar cast.

Nyoy Volante as Drew Boley, the wannabe rock star, is most surprising, as no one expects those gruff notes to come out of what we know to be a mellow, acoustic pop singer. In previous productions, his more famous gifts were put to good use, but here, a voice that no one’s heard before makes him very exciting to watch and listen to.

He also mines his character’s humor for all he’s worth (his transformation into the lead singer of a boy band is hilarious to witness).

Vina Morales as Sherrie Christian is a revelation in this, her first foray into musical theater. Loaded with charm, sex appeal, killer abs and stage presence, she proves to be not only a wonderful actress with a firm grasp on her role, but also an amazing singer who knows what to do with the material.

One favorite is her rendition of “Harden My Heart,” something the audience should watch for. She turns this song into an acting piece, grounding her portrayal in reality.

MiG Ayesa, in his Philippine theater debut, is probably the only cast member who’s had the opportunity to play his character, Stacee Jaxx, for a good long chunk of time, having portrayed it both on Broadway and in the US touring production.

He plays this tired, strung-out, self-centered, stereotypical rock star to the hilt—from the guyliner to the black nail polish, and hair that looks like it hasn’t been cut and/or combed in years.

For Stacee, people are commodities to be discarded once their usefulness has run out. But MiG is skilled enough to make sure we actually don’t hate the poor sod, but feel kind of sorry for him, especially when that thing called karma kicks him squarely in the nuts.

The rest of the cast is just as incredible. Jett Pangan as narrator Lonny Barnett scores one for the funny man keeping us abreast of events, and treating us to that signature baritone when he starts to sing.

Jamie Wilson as Dennis Dupree, owner of The Bourbon Room, looks like an ’80s relic in the best possible way, with a gravelly, brandy-soaked vocal quality and a committed characterization.

Aiza Seguerra as Regina (pronounced reh-jai-nuh) is blazing as an activist trying to prevent The Bourbon Room’s destruction. She plays another role, and is great in that one, too. Some of the loudest audience howls are reserved for her.

Calvin Millado and Bibo Reyes as Franz and Hertz Klinemann, the German father-and-son team that wants to turn the Bourbon into a Foot Locker, are both uproariously funny and committed in their portrayals. Bibo especially seems to inhabit his character with ease and aplomb … maybe a little too well.

Jinky Llamanzares never fails to amaze, with a set of pipes that seems a perfect fit for everything she has to sing.

The ensemble is just as committed. Altair Alonzo, Berl Angeles, Mikkie Bradshaw, Apple Chiu and Japs Treopaldo don’t take anything for granted. Playing a myriad of parts—from wait staff to sleazy politicos to sleazier music executives and activists, the word “ensemble” seems to not apply.

Chiu in particular wails her ’80s rock anthem like none I’ve heard before.

The onstage band led by Ceejay Javier plays it tight and terrific. I only wish that, at the performance I saw, the music was louder. Here’s hoping that’s been fixed, as this kind of music should be played a few decibels higher than normal.

And here’s hoping for another run of “Rock of Ages” in the future!

Oh yeah, how was the movie? I honestly don’t know, I haven’t seen it. And I’m not sure that I will. Guess I just love the live musical a little too much.

Read Next
Stars go incognito on ‘I Get That A Lot’
EDITORS' PICK
High inflation: Your P1 is now worth only 87 centavos
Geek out at TOYCON 2022 powered by Smart Signature
Unemployment rate up to 6% in May
UK’s Boris Johnson will resign, BBC reports
High-risk pregnancy: Reducing your risk is in your hands
House energy committee chair Arroyo bats for cheap electricity
MOST READ
Suspect in grisly killing of missing woman in Bulacan arrested
Kim Atienza’s daughter flaunts bikini body in response to critics of her ‘revealing photos’
Cop slain in Isabela ambush
FDA probes popular Filipino noodle brand for ‘high level of ethylene oxide’
Don't miss out on the latest news and information.